By Jane Rozum, CSU Extension, Douglas County
There’s a new Horticulture Agent in Douglas County, me. There’s so much to learn, from my new environs to the new work routine. Then there are all the garden questions from around the county, What’s this plant? What’s that bug? In the last few weeks, the number of calls to our office is skewed towards insects. In my county, I’m lucky. The Director, Joe Julian, is an entomologist.   When he’s not available to answer questions about insects, however, they fall to me.
Even though I’m a newbie horticulture agent, I’m not new to the question/answer routine in Extension offices. Before going back to school for a Master’s degree, I was a Colorado Master Gardener (CMG) in the northern Front Range for many years. So I have learned what most seasoned CMGs know, there’s always something you don’t know and the challenge is figuring out the problem. 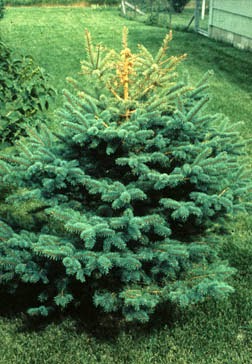 White pine weevil damage on spruce. (Photo courtesy of David Leatherman.) from White Pine Weevil CSU Fact Sheet 5.606
Take for instance, a plant sample that was brought to the CMG in the office a week ago.  This sample was from the terminal end of a Colorado Spruce and was dead. The homeowner stated that it wasn’t just one young spruce in the landscape with this symptom, it was 20. Ugh. My knee jerk reaction was to rattle off reasons for top dieback in spruces, but the sample didn’t fit my usual responses.  The new terminal growth was bent in a shepard’s crook and the inner bark had been stripped leaving just the dead outer bark. There were also sawdust covered oval patches with a larva inside. 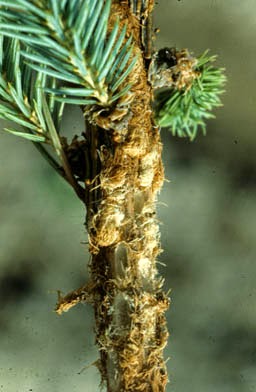 White pine weevil chip cocoons. (From Fact Sheet 5.606)
I was stumped. So I did what any new horticulture agent would do: I went into my office and googled, ‘spruce terminal dieback, sawdust cocoon’ on my computer. Eureka! There I found an exact description of the symptoms from CSU Fact Sheet 5.606: White Pine Weevil (Pissodes strobi). Say, what? But the homeowner’s plant is a spruce! With all my experience as a CMG, I had never come across this insect.
As I left my office to talk to the Master Gardener, another CMG had arrived and was explaining to the first: Yes, this is the White Pine Weevil and is a common problem in the Castle Rock area in young spruces. The adults hibernate in leaf litter in the winter, then climb up the tree to the terminal branch to feed a bit and lay eggs just under the bark. When the larvae emerge, they feed under the bark, girdling the terminal tip. As the larvae mature, they make their way down the terminal tip, and at some point decide they’ve had enough and pupate, covering their bodies with sawdust. When adults emerge from the cocoon, they feed a bit on needles and bark, then head down the trunk to hibernate in the leaf litter until next season.
How could an insect that didn’t seem to bother the spruces of urban Northern Colorado Front Range be thought of as ‘common’ just 70 miles south? Thanks to CSU experts, the answer is ‘elevation’. In Ft. Collins, Loveland and other Front Range cities, the elevation is around 5,000 feet. In Castle Rock and Colorado Springs, the elevation is above 6,000 feet. Why would a 1000 feet make a difference for this insect? Only it knows, and it isn’t talking.
As I start my horticulture agent career, the same mantra will prevail as it did when I was a Master Gardener: There is always something you don’t know and the challenge (and fun) is figuring out the problem. Bring it on, Douglas County, I’m ready for more challenges to come my way!
To find out more about White Pine Weevil, check out our CSU Fact Sheet 5.606.
Posted by CSU Hort Agents at 10:44 AM