A long history of fruit production in Colorado 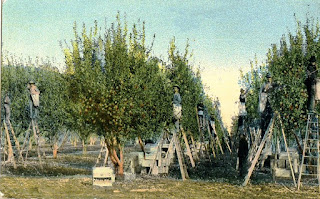 Colorado has a long history of fruit production. The people who first started growing fruit in
Colorado were a hardy, determined lot who had to learn through trial and error. We owe a great
deal of thanks for fruit production in Colorado to these early pioneers.
It was once a very common saying that “you can’t grow fruit in Colorado”. Fortunately, the
unwavering ground breakers didn’t listen to the naysayers. Their persistence and determination
during the costly experimental stages of fruit production rewarded them. They overcame the
challenge of learning what varieties would grow in Colorado’s climate and how to grow fruit by
means of irrigation and methods of treatments. According to the Boulder Apple Tree Project
https://appletreeproject.org , Colorado was one of the top apple-growing states in the United States.
Once, there were thousands of acres of orchards in the Denver area and along the Front Range. A
CSU bulletin titled Fruit Interest of the State tells us that by the 1890’s apples were the primary
fruit crops, but plums, pears, peaches and cherries were also grown across the state. It’s exciting
that a number of these historic orchards that were started in 1868 still stand!

On the Western Slope of Colorado, the Grand Valley apple boom occurred about 1895 when
promoters planted thousands of acres, in five, ten, twenty, and forty-acre plots. Western Slope
fruit won prizes throughout all parts of the U.S. for the fruit’s beauty, color, and taste. In 1908
fourteen varieties of Grand Valley apples won sweepstakes at Cornell University. When thirteen
carloads of fruit from Colorado and other Western states were exhibited at the National Apple
Exposition held in Denver in January 1910, Grand Junction won the sweepstakes for the best
carload of apples along with a $1,000 award. Fruita came in second place with $500. In 1913,
Grand Valley apples took first prize in Cleveland, OH. It’s said that Grand Valley fruit won blue
ribbons in all the major cities where it was exhibited. 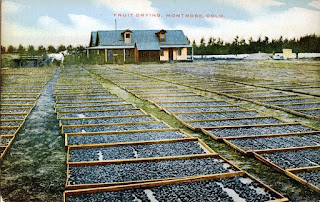 During the apple boom of 1895, a large number of the newly planted orchards were sold to
eastern buyers, mostly professional people. Unfortunately, these people knew very little, if
anything, about growing fruit, especially in irrigated orchards. As a result, over irrigating and
poor soil drainage led to a build up of salts and over-watered, stressed trees. This of course led to
unhealthy trees and lowered production. Codling moth soon became an overwhelming problem
with neglected orchards of apples and pears everywhere. https://extension.colostate.edu/topic-areas/insects/codling-moth-control-in-home-plantings-5-613/
The trees were so infested with pests that there was no hope for any solution and before they knew it, the fruit industry was ruined. Colorado late spring frosts and hail on the Front Range effected many growers.  Many of the orchards were eventually converted to more tolerant crops.
Fortunately, fruit production is alive and well today.  https://extension.colostate.edu/topic-areas/yard-garden/backyard-orchard-apples-and-pears-2-800/ 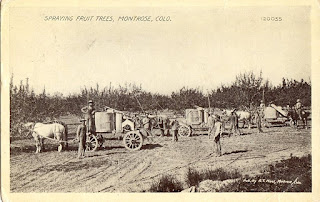 It’s so fantastic that people are now looking into the history of these orchards and the trees that
once grew there. Organizations such as The Applecore Project of Western Colorado
https://www.applecoreproject.org/ is advancing fruit tree preservation through the use of mapping
tree varieties, identifying trees, grafting and planting new trees, as well as documenting and
connecting local resources towards preservation. They are rediscovering the stories of the people
who planted and cared for these trees.  The Montezuma Orchard Restoration Project is another great organization helping to preserve the fruit history. For example, did you know there was once a Colorado Orange Apple? This “winter” apple was a mix of sweet and tart flavor with a surprising orange-ish color. Orange Apple Thanks to Jude Schuenemeyer, with the Montezuma Orchard Restoration Project in southwestern Colorado, this apple has been rediscovered. The apple was believed to be extinct. 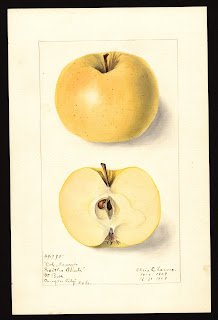 But one day Jude says he and his wife were in an orchard in Canyon City when “lo and behold,
on the ground underneath the tree in the duff, there were these orange-blushed apples. And then
on the tree, there were some of the apples still hanging.” They say the apples have a fantastic
complex flavor. This wonderful apple almost went extinct because people preferred bright red
apples over this unique variety. Through DNA testing and comparing their find to some archival
wax apple replicas at Colorado State University they’re now about 98% sure that they have
discovered the elusive apple. How great is that!
Thanks to these brave pioneers we are now enjoying the fruits of their labor.