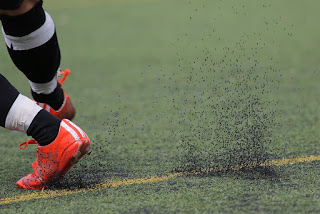 It has been a while since I last wrote (some called it a rant) on this topic. That was in 2016, right here, in making the case for the playing surface in CSU’s new football stadium to be natural grass. Obviously that didn’t happen. And I would still argue that the decision to install synthetic turf in our stadium was a misinformed choice for so many reasons. While the companies that peddle synthetic turf to uninformed athletic directors, school boards, parks directors, coaches, booster clubs, etc. make the case that synthetic is (compared to grass) cheaper to maintain, easier to care for, longer-lasting, more environmentally friendly, and safer – those that do their homework can easily find evidence to the contrary.

As I did acknowledge in that 2016 blog (and still do), there are situations where the use of synthetic turf makes total sense and is clearly a better choice than using grass. But I would argue that, in MANY cases, the choice to install synthetic simply doesn’t make economic sense – at least if that is the most important consideration. When amortized over a 10 or 20 year time period, savvy entities from cities like San Diego to small high schools are refusing to drink the “synthetic is cheaper/easier/safer” Kool-Aid.

More important than economics is the question of player safety and injury rates between the two types of playing surfaces. Early 2000s research on synthetic/natural turf injury rates was rudimentary, and the results were cherry-picked by synthetic turf companies to paint their product as actually being safer than grass for athletes. In recent years, much more in-depth research has been conducted. The most convincing, long-term science has been done by the National Football League, the NCAA, and international football and rugby entities – using injury data collected over many years of play on both types of field surfaces.

Without getting too detailed (you can read more, citations below), the NCAA study (examining injury data covering 9 years) found PCL (posterior cruciate ligament) injury rates to be about 200% greater for football played on synthetic turf compared to natural grass.

The NFL study, examining all lower body injuries occurring between 2012 and 2015 (all 32 NFL teams), found an overall 16% higher injury rate when playing on synthetic turf. Some of the most surprising numbers were found regarding non-contact injuries. Overall non-contact injury rates were 27% higher for synthetic turf – including a 103% higher rate of ankle injuries that resulted in more than 8 days of time lost being able to play or practice.

Increased interest in and sophistication of playing surface research is showing that type of sport (soccer vs. football vs. rugby), player age and size, gender, shoe cleat type, competition level, practice vs. game contact, player position, and even whether a player is right- or left-footed all play a role in the occurrence of injuries when comparing synthetic and natural grass surfaces.

The preponderance of research-based evidence suggests that well-maintained natural grass is likely safer for athletes than synthetic surfaces. When the economics (amortized over the realistic life cycle of fields) are taken into account, natural grass is also a winner. If you are ever in a position to influence a natural grass vs. synthetic turf decision, please dig deep for answers – and resist drinking the synthetic turf Kool-Aid.

For more details on the NFL and NCAA studies, see this excellent article by Dr. Casey Reynolds, the Executive Director of Turfgrass Producers International.