The struggle with squirrels is real


Four years of escalating tensions with the squirrels in my garden have driven me nuts.  Each year dreams of a bounty of squash, tomatoes, melons, and pumpkins are left in ruin as my plants serve as snacks for the bushy-tailed beasts. Though cute and fun to watch, they haven’t taken my admonishments seriously, growing bolder and more willing to strip the plants of all that is good.

They’re burying peanuts everywhere; so much food is being cached in my yard it’s as if they’re prepping for the Squirrelpocalypse.  My neighbors are feeding them and when I walk by in the mornings at least a squadron of squirrels gambol about they trough of nuts set out for them.

They leave their nuts in my lawn, containers, flowerbeds and gutters; we’ve found peanuts on cable boxes, in camper crevices, and centered on the walkway to the house.

If only they would stick to eating those peanuts, but no, they prefer fresh produce plucked from the vine. Tomato theft is an issue when love apples ripen, with squirrels pilfering ripe fruit and scurrying off to feast.

Adding insult to injury, they often eat only half of the tomato, leaving its savaged carcass for the gardener to find. The gardener’s wails upon discovery reverberate throughout the neighborhood and the rest of us lift our hands in a three-finger-Hunger-Games salute to the fallen.

A clever gardener in Wyoming offered her solution: hang round, red Christmas ornaments on tomato plants at this time of year.  Her idea is intriguing; the Trojan tomato, once or twice bitten, tricks the animal into thinking that there’s nothing interesting on the plant and it leaves the real tomatoes alone later in the summer.  I have no idea if this works and it isn’t based in science, but desperate times call for desperate measures. Festoon your garden like its Christmas in July.

Pitting my mind against a wily opponent is exhilarating and confounding, as they deploy adaptive thinking faster than I can counter it. It began several years ago when the squirrels discovered the pumpkins, gnawing them into hollow husks before I could harvest.  In response, I caged off the ripening squash.  The following year, they preyed upon squashes before the flowers could close, eating the young fruit before it had a chance to swell.  So I caged off the flowers before they opened.

The following year, the bandits ate the vines, robbing me of any hope for pumpkins.  The solution, it seems, was simple: cage the whole area. 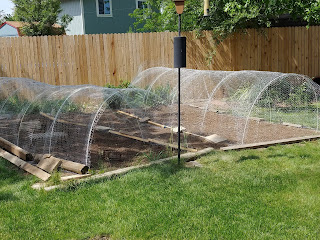 are erected in my yard.

It might be folly, but I’m a vain enough gardener that I don’t want a huge expanse of chicken wire visible in the raised beds near the front yard.  So those beds are discreetly covered in bird netting in hopes that it’s sufficient protection.  But the squirrels are testing the perimeters, shoving their paws underneath the cloth to dig at the edges of the bed.

If things get bad I might borrow a co-worker’s dog, Hank, a coonhound who takes protecting his humans from the impending Squirrelnarök seriously.  Padding onto his deck each morning, he sniffs for his opponent.  Upon discovering them in nearby trees or along the railing, he rushes back and forth, yodeling his alarm to nearby neighborhoods.

Hank’s warbling bray amuses the squirrels, who natter and chuff in response.  The tease him but he doesn’t give up his patrol until running out of energy, whereupon a nap is required.  I haven’t quite gotten to the point of a yodeling hound circling a caged off garden filled with Christmas baubles.  But I’m close, very close.