What is that strange little yellow-green flower?

Posted by Irene Shonle, CSU Extension in Gilpin County
Almost every spring, someone brings me a picture or a plant of a strange little flower they’ve never seen before, and can’t key out or even begin to guess the family for. 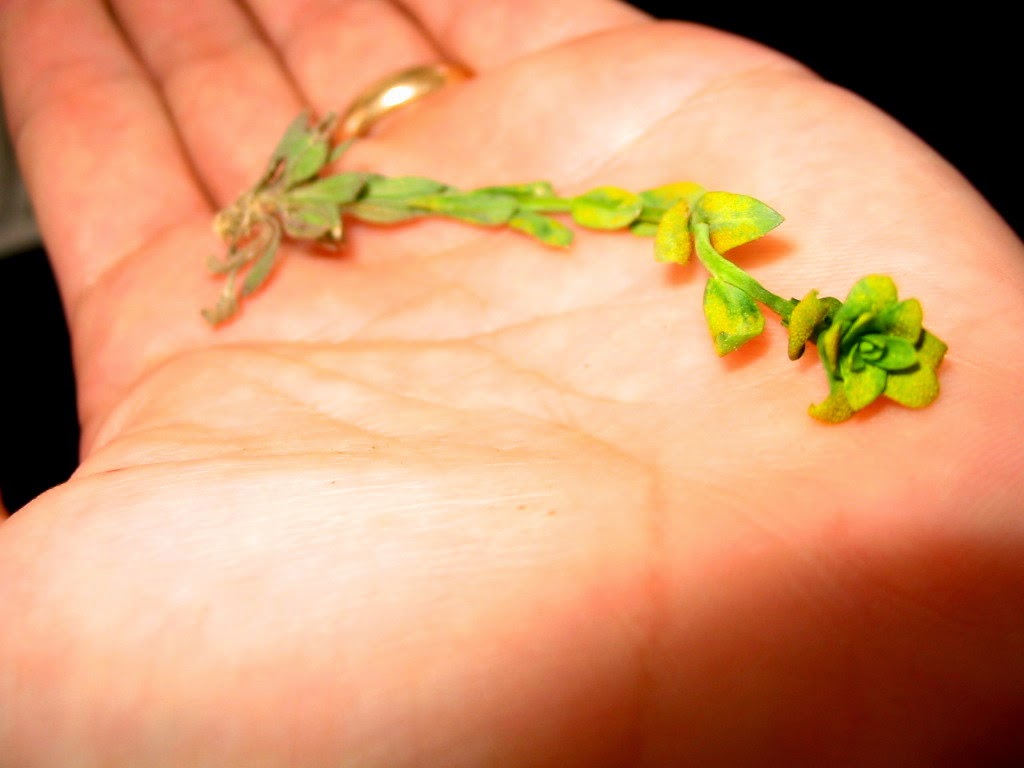 Any guesses before you keep reading?  I’ll admit, this had me stumped at first, too.

This rust attacks 11 different genera, all within the mustard (Brassicaceae) family.  The fungus infects the host plant in the late summer via wind-blown  basidiospores. The fungal hyphae germinate and then parasitize nutrients from the host plant. The fungus requires an alternate host, a grass, where the basidiospores will develop to continue the cycle.  So far, pretty standard fare for rust fungi.

What makes this particular fungus so cool, though, is how it completely hijacks the plant in order to reproduce sexually.  First, it inhibits true flowering in the host and then it causes the plant to create yellow-green pseudoflowers.  The shape and the color visually mimic other spring flowers (even under UV light) – and  these ‘flowers’ fool insects into ‘pollinating’ them  (the insect visits transfer spermatia from one infected plant to another)!  As Barbara Roy states in her “Letter to Nature” describing this phenomenon, it is truly an “ extraordinary case of pathogen-mediated floral mimicry.” (http://www.nature.com/nature/journal/v362/n6415/abs/362056a0.html)

To more fully dupe the unsuspecting insect, the fungus goes even further and causes the plant to produce both a scent and a nectar reward.   In a study published in Molecular Ecology in 2002 (http://onlinelibrary.wiley.com/doi/10.1046/j.1365-294x.1998.00426.x/abstract), Raguso and Roy found that the pseudoflower fragrances were very different from the host flowers, host vegetation and the flowers of other plants blooming at the same time.   In fact, the fragrance was chemically similar to completely unrelated noctuid-moth-pollinated flowers, such as Cestrum nocturnum (night-blooming jasmine).  The uniqueness of the scent is hypothesized to make sure that the visiting insects stay true to the fake flower.

Here is a picture of the Rockcress when not parasitized – you can see why you’d never think it was the same plant:

Here is a link to more pictures of the plant, both paratisitized and unparasitized:
http://www.plantsofmagnolia.net/Native_plants/Brassicaceae/Boechera/Boechera_fendleri/Boechera_fendleri.htm

What an interesting world we live in!
Posted by CSU Hort Agents at 10:32 AM