Since 2011, San Miguel Basin CSU Extension Colorado Master Gardeners have grown different crops under different covers in our High Altitude Season Extension (HASE) research trials.  We want to know which covers, if any, extend the season and improve yield and quality for whatever crop we are growing that year.  Another goal of the HASE research beds is to find varieties that perform well in our short and cool summer growing season.

In 2016, we grew 3 varieties of broccoli under 3 different season extension covers and a ‘control’ (no cover).  We chose varieties that would continue to produce side shoots after the main head had been harvested.  Out of the 3 varieties we chose, ‘Solstice’, ‘Umpqua’ and ‘Nutribud’, ‘Nutribud was our favorite because it had the best yield, flavor and nutrition.

This year, I grew broccoli in my home garden.  When I was planning my garden, I didn’t know if I still had seeds for ‘Nutribud’, so just in case, I bought some seeds at the garden center of the variety ‘Belstar’, an F1 hybrid. (For this blog what matters is to know that seeds from hybrids usually don’t produce plants that are ‘true to type’)  The seed packet said that ‘Belstar’ would continue to produce side shoots after the main head was harvested.  That is what I wanted- I care more about getting an extended harvest through the season than a single harvest of large heads.  After all, I cut them up to prepare them to eat, don’t you?   And since broccoli is a relatively big plant, I wanted to get as much food out of the space they take up as possible.

‘Nutribud’ broccoli is an open pollinated variety.  (If you save seeds from an open pollinated variety grown correctly, the next generation of plants from those seeds will come ‘true to type’.)  Dr. Alan Kapuler de-hybridized a hybrid variety called ‘Pacman’ and named it ‘Nutribud’ because in a UC Davis test on nutrition in different broccoli varieties, 'Nutribud' came out highest in free glutamine, a building block of protein: good for the brain and healing for the body!

Turns out, I did have seeds for ‘Nutribud’ at home so I decided to plant 4 plants of each variety.  3 of the ‘Nutribud’ plants produced full-sized heads at the end of July.  The 'Belstar' broccoli produced full-sized heads by mid-August and both varieties continued to produce side shoots until killing temperatures at the beginning of November. What blew my mind was the difference in size between the side shoots of the 2 varieties.  ‘Nutribud’ continuously grew bite-sized side shoots from the axils in the leaves after the heads were cut.  However, the ‘Belstar’ plants produced head-sized side shoots from large side branches!  I was amazed because none of the other varieties that we grew in 2016, produced side-shoots the size of broccoli heads!  They all produced smaller shoots, like the ‘Nutribud”. I didn’t do a thorough job weighing each harvest, especially at the beginning, so I don’t have data to show which variety actually produced the most edible broccoli, but it was close.  I could harvest many 'Nutribud' side shoots weekly but it took several weeks for the 'Belstar' side-shoots to grow to their larger size.

Posted by CSU Hort Agents at 2:55 PM No comments:

Just as we need to settle into the increasingly shorter days and colder nights, we also need to adjust to the bleak landscapes brought on by winter. Annuals die, perennials die-back, and woody plants lose all their leaves, leaving a bleak landscape, indeed! Yet, amidst all this barrenness, there are some plants that stand out, full of color and life: the evergreens! We’re all well aware of the various evergreen trees that fill our Colorado landscapes, but how well do we know the evergreen perennials that dot those same landscapes? Here’s a few to take note of this winter:
Arabis caucasica (Rock Cress) is a low-growing, creeping evergreen that sometimes takes on a mounding habit. This plant prefers sun and can adapt to various moisture levels. In the early spring, Arabis caucasica features a profuse, mass flowering of delicate, white blooms. The foliage is fairly unique, often hairy with a toothed margin, and provides a nice splash of texture and color throughout the winter. 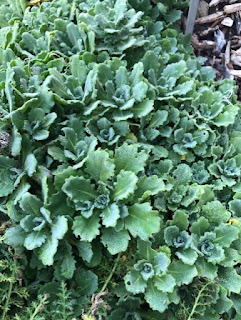 Arabis caucasica in late fall. Photo by Hania Oleszak.
Armeria maritima (Sea Thrift) is one of my personal favorites. The evergreen foliage appears grass-like and persists throughout the winter. In the early summer, the cutest clover-like flowers bloom on leafless flower scapes. This whimsical plant is quite hardy, doing well in sunny, dry, and salty environments. 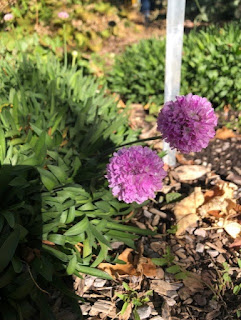 Armeria maritima in late fall. Blooming occurs in early summer, but can continue flowering if deadheaded (even into the fall!). Photo by Hania Oleszak.
Cerastium tomentosum (Snow-in-Summer) is an aggressive, evergreen ground cover. This plant prefers sunny, dry conditions and can do well in poor soils. Cerastium tomentosum features white flower blooms in the early summer and textured, hairy, grayish foliage in the wintertime. 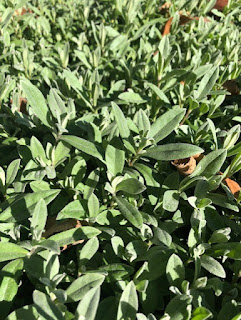 Cerastium tomentosum in late fall. Photo by Hania Oleszak.
Delosperma nubigenum (Yellow Ice Plant) is a low-growing, semi-evergreen succulent that is being bred for greater cold hardiness. Preferring sunny and dry conditions, Delosperma nubigenum is often found in rock gardens. In the summer, this plant features a mass flowering of yellow flowers; in the winter, the jellybean-like leaves take on a purplish tinge as the cold sets in. 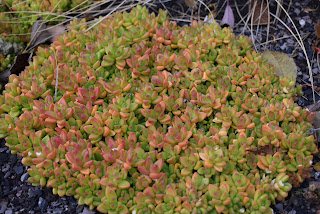 Delosperma nubigenum in fall; note the red/purple tinge coming on. Photo from Conservation Garden Park.
Iberis sempervivens (Evergreen Candytuft) is a low-growing, spreading evergreen. It prefers full sun to partial shade and is adaptable to various moisture levels. In the spring, Iberis sempervivens features blooms of white or pink flowers, and can potentially have secondary blooms in the fall. In the winter, Iberis sempervivens provides a nice texture to the landscape through its linear, evergreen foliage. 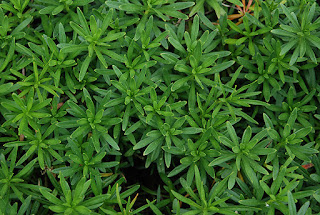 Iberis sempervivens foliage. Photo from Oregon State University.
Do you have a favorite evergreen perennial? Let us know below!
Posted by CSU Hort Agents at 12:14 PM 1 comment:

Castor bean (Ricinus communis) is a tropical beauty native to east Africa that is extremely showy, but also incredibly poisonous. It’s commonly planted in the landscape as an annual to provide structure, color, and texture. I first met castor bean during a family vacation in northern Minnesota as a young teenager – more on this later.

In frost-free climates, this semi-woody plant can grow up to 40 feet tall, but in Colorado, you can expect annual growth of up to 10 feet. It won’t survive temperatures below 32 degrees. It’s an absolute garden showstopper with vibrant red, pink, or green seedpods that are spikey and persistent in late summer. Leaves are star-shaped and up to 18 inches across on long petioles. The Latin Ricinus translates to “tick”, as the seedpods are said to resemble blood-filled ticks. The seeds are small and look a little like black-eyed peas.

The plant is in the Euphorbiaceae family (think poinsettias and spurge), so there will be milky sap with any broken plant part. Those with allergies to latex may have reactions to the sap, so wash your hands and wear gloves when handling the plant.

But the sap really is a minor issue when it comes to poisonous nature of this plant. The seeds are filled with ricin, one of the world’s deadliest natural poisons, a blood-coagulating protein. Ricin is an estimated 6,000 times more poisonous than cyanide!

Back to northern Minnesota…

My brother was a budding horticulturalist (and still is!) and he came across this plant during our trip. Some kids collect rocks, but Jeffrey collected plant parts and seeds. Not knowing what it was, he picked off a few of the seeds, put them in a black plastic film canister (remember those?!), and brought them home.

We had a beagle mix named Bosley growing up. He was a great dog but an absolute food hound. What Bosley consumed was legendary – entire loaves of bread, charcoal from the grill, two pounds of Starlite mints, mouse traps baited with peanut butter, an entire jar of peanuts – he ate anything and everything. He was a counter surfer and was known to steal boiling hot French fries off the oven tray.

A few months after our trip “up north”, the film canister was knocked off Jeffrey’s dresser, ended up on the floor, and sweet hungry Bosley ate some of the seeds. And he got really, really sick. Our family vet, Dr. Fred, suspected that he ingested something poisonous and eventually we figured out the puzzle, but only after we had the seeds identified. None of us realized how poisonous the seeds were (4-8 seeds can kill an adult human). Boz was in tough shape in ICU and we were all nervous wrecks.

Fortunately, with the help of the University of Minnesota Veterinary Medical Center and their toxicology lab, Bosley survived. His legend lives on since Dr. Fred wrote up a scientific publication about his treatment for him – Boz has a refereed publication! I remember picking up Bosley from the vet. He was a bit sluggish and a little worse for wear but recovered in time…and continued his quest to eat anything and everything his entire life. Fortunately, there are now antidotes available for any accidental poisonings that occur.

Interestingly, the poison ricin is being investigated as an anti-cancer agent – another common name for castor bean is “Palm of Christ”. And maybe you took castor oil to help you with heart burn or constipation? Don’t worry about being poisoned. Ricin is water soluble and is not released during the pressing process.

The plant grows easily from seed (just limit how many you purchase online to avoid the watching eyes of the FBI) and needs regular water in the summer. But just heed caution when it flowers and produces seed. If you have young kids or hungry dogs in the landscape, it’s best to admire it in photos instead.

Posted by CSU Hort Agents at 6:48 PM No comments: