Send the children from the room.  Normally this is a family column but in celebration of the end of October, I wanted to share a Halloween love story.  You see, some time ago, another CSU Agent asked if it’s true that spiders scream while mating.  Her friend had read this in the paper and was fact-checking it.

This set me to wondering: why would they?  From the female’s perspective, the wooing and winning of love often involves having to endure the male dancing about, rushing in to tap her on the head to see if she’s interested, and dashing away in case she’s not.  This goes on, back and forth, until the male, convinced of success at winning her heart, gently enfolds her in his arms.  All eight of them.  Who wouldn’t scream at being held in arms covered in spines and tipped with claws?

How delighted she must be when he runs his fangs in a loving caress along the back of her head.  Oh, yes, the male doesn’t like to approach the front – that’s where her fangs are, after all, and one mustn’t take chances.  His embrace is from the back, and since the female is typically much, much larger than the male, he has to hold on somehow.  His fangs come in handy to use in gripping her in the embrace.  How romantic.

Female spiders aren’t the only ones who have good reason to scream.  There’s a lot of risk involved for the male and the whole episode is one long stressful event.  After his final molt, a male spider will leave his web in search of a female.  He may no longer hunt or be interested in food.  Instead, he is so consumed with finding the female that he may wander far and wide to find her.

This often leads him into danger such as other spiders, predatory birds, or into human houses.  Males wandering in the fall are a large proportion of spiders found in our homes, often meeting a tragic end under some human’s shoe.  The female doesn’t engage in such nonsense; she has better sense than to give up her food and housing just to search for a guy.

Once the female is found the risk increases.  They are almost always larger, faster, stronger, and, quite often, hungry.  It’s a thin line between being a suitor and being a supper, and males must take steps to ensure that the female is well fed before any love happens.  Some males will use the ‘tap-and-dash’ method to test her willingness, others take no chances and bring living food as a nuptial gift.  “Here, have a fly - enjoy it”, is a good plan when wooing a female of any species.

Once she accepts the male, it’s still risky.  Yes, the male has two pedipalps and that may seem impressive and worth boasting over.  But there is a rather gruesome reason for this:  in many species, after the nuptials take place, the male must seal off the female to make sure no other male can impregnate her.  He does this by snapping off the pedipalp to leave as a plug.  When a spider decides to ‘break it off’ with his girl he really means it.

To answer the question “do spiders scream while mating?” one has to respond: “who wouldn’t?”  The reality is that spiders don’t have vocal chords or bellows-like lungs with which to scream.  Their sounds come from rubbing legs, drumming the ground and other external means.  Thus, the answer is no, but that doesn’t mean they wouldn’t if they could.

Which Trees to Transplant in the Fall in Colorado

As a rule of thumb the best times to transplant most trees and woody shrubs is in early spring (as soon as the soil can be worked), or in fall (after leaves drop) – the key factor being that the tree or shrub is in dormancy. In some parts of the country, fall planting is actually preferable since most trees are channeling energy into root growth in autumn, as opposed into shoot and leaf growth in spring. However in Colorado, fall can be less ideal since the ground can be very dry in winter and roots of transplanted trees can suffer additional damage. If you do choose to transplant a tree or shrub this fall, there are several considerations that can improve your odds for success. 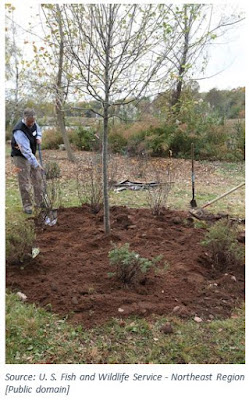 Firstly, aim to complete the transplant by the end of October. Transplanting any later in fall or winter will leave little opportunity to help water in the new planting before the ground freezes. New transplants are particularly susceptible to winter drought injury due to the dry winter soils in Colorado. This can be curtailed in part by winter watering, which is critical for newly transplanted trees and preferable for all established trees and shrubs in Colorado (refer to Fact Sheet 7.211 Fall and Winter Watering for more information). Winter drought can also be helped by properly mulching a newly transplanted tree (refer to Fact Sheet 7.214 Mulches for Home Grounds).

The species of the tree also factors into transplanting success. This is in part due to the difference in root structure between different species – with some species having shallower, more fibrous root systems that are better adapted to transplanting, especially in fall. Some types of trees really should only be planted in spring including oaks, fruit trees, poplars, willows, redbuds, and birches. Other species can be more successfully transplanted in the fall such as maples, alders, lindens, catalpas, elms, ashes, and honeylocusts. Conifers such as pine and spruce benefit from being transplanted when soils are warmer.

Whether you choose to transplant a tree or woody shrub this Fall or wait until Spring, ultimately the success of your planting depends on following proper tree-planting steps (refer to GardenNotes #633 The Science of Planting Trees). Happy planting!

When is the best time to transplant trees? http://blog.davey.com/2017/11/when-is-the-best-time-to-transplant-trees-pine-oak-maple-and-fruit/