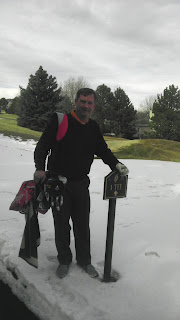 While returning from a quick 16-hour (ya, I know…what was I thinking?) visit to Toronto this week, where I taught at the Canada Turfgrass Conference, a flight attendant gave me the “what do you do” question. Invariably, after I explain what it means to be the Extension (first, explain what “Extension” is) turfgrass (no, not that kind of grass…ha ha) specialist for Colorado (“Really? You get paid to do THAT?”), comes "THE QUESTION": “So, you must play golf every day?”.  Wisely, my response depends on who’s doing the asking. “Sure, every day…except for Sunday...that’s my day off” for the flight attendant (she smiles…nods…hands me a Diet Coke…ignores me the rest of the flight). If our Director of Extension? ”Noooo…haven’t played in years…don’t even know where my clubs are” … as he judges my explanation of what Extension is…and makes a mental note to cut my travel budget for next year.

Time for full disclosure: I did play golf last week. In January. In Colorado.

It was only 9 holes, but I played – and fairly well, for the first round of the year. The remarkably warm weather, combined with lack of snow, got me thinking (between shots) about winter watering.

The lack of moisture (rain last year…and snow this winter) has stirred up memories of 2002: our last big drought year. We are already being warned of the potential for landscape watering restrictions. For our lawns, a dry winter and spring invites turf damage by mites. The best way to prevent (or at least reduce the severity of the problem) winter mite injury to turf is by watering susceptible locations (south- and west-facing lawns) a few times during the winter. While this means pulling a hose and sprinkler around the yard now, it’s better than having to water new sod or seed in April. Temperatures this weekend will allow you to do some effective watering: just enough to moisten the surface, but not so much that you get runoff or puddles – which later turn to ice. In addition to mite prevention, winter watering can mean the difference between success and failure of lawns sodded or seeded last fall. Some “experts” will promise that NOT watering this winter and spring will make your lawn “tougher” and that it will form a deeper root system. Well, it’s not true.

All plants need water to grow. And if the soil is too dry for a root to penetrate, how can it ever grow deeply? This holds true for both turf and trees. So don’t forget to water your trees – especially trees planted last growing season. The trees, turf and their respective root systems will love you. You’ll have great weather and plenty of time to water this Sunday, since you have no reason to watch the Super Bowl this year. Well, ok, maybe I’ll be watching for Kate’s Mercedes ad… 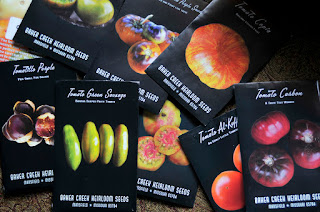 Hi. My name is Tony (all of you …”Hi Tony”). Yes, I have an addiction…a peculiar, seasonal, horticultural addiction. I compulsively order vegetable seeds…in almost obscene numbers. I’m not sure when it began, as I’ve been a veggie gardener since I was about 6 years-old. Last year I grew over 40 varieties of tomatoes. In 2011 it was another 40+. Problem is, there were only a couple of repeats from 2011 to 2012. Last year I planted more than 10 varieties of watermelon. I think those plants maybe yielded 5 fruit…total…tiny, pitiful, miniature watermelons. Sad. Damn dumb, as Alison would say. Oh, yes, she DID say. And there were the 8 varieties of carrots…20+ peppers…5 or 6 cukes…hmmm. And squash. So many squash. Too many squash. Maybe 10? OK, maybe 15?  What was I thinking? Well, it sounded like a good idea in January. I go online…I click and add (and add…and add) to my shopping cart. I have 53 items in my cart? Impossible!?!? I haven’t even gotten through peppers yet...or peeked at peas or kohlrabi! How could this be? And some of these I wouldn't eat if they DO produce…okra? Ewww! Confession: I was seduced by the flirtatious Joan rutabaga! Yes, seduced - by her “smooth and pleasing shape” and flesh “having a delicate and sweet flavor”.  Seriously, who needs 50 Shades of Grey? Check Joan out…http://rareseeds.com/vegetables-p-z/rutabagas/joan-rutabaga.html. Here's the problem:  the catalogs are too tempting, the descriptions of the plants too enticing, the glossy photos too alluring. My friend and fellow blogger, Carol, calls it veggie porn. Really? Have you never immersed yourself in the Baker Creek Heirloom Seeds catalog? If so…you totally understand my, ahem, “problem”. Before you laugh, check out the Purple of Sicily cauliflower centerfold on page 28 of their 2013 catalog…OMG! I don’t care for cauliflower, but I could fall for her without even meeting. Burpee’s PG-rated catalog (www.burpee.com), while very nice, will never compete for my affections as long as Baker Creek publishes its X-rated glossy yumminess. So…please excuse me while I log on to Baker Creek’s website and begin my 2013 order. I could be awhile... so....while you’re waiting for me to return… share a horticultural addiction you might have…if you dare. Garden gnomes… plant swapping… compulsive weeding… deadheading... don't be shy!?
Posted by CSU Hort Agents at 1:29 PM 13 comments:

A Nod to Carl Linnaeus

But I still think he’s the bomb shizzle.  And yet most people outside of science don’t know who he is or what he did in his short 71 years.  Of course I’m talking about Carl Linnaeus.  The Father of Plant Taxonomy.  The man who brought order to our chaotic world of living things.  I’d like to think he was one of the first obsessive-compulsive individuals…maybe that’s why I love him so much.

Don’t know much about The Man?  Let me tell you a few things…

Linnaeus (1707-1778) was a Swedish botanist who developed a cataloging system (which is still in use today) to classify living organisms.  His first published work, Systema Naturae, in 1735 (he was only 25 years old!), was revolutionary.  He spent most of his life perfecting the system.  The first edition was only 14 pages long and grouped animals into the categories of Quadrupedia (four-footers), Aves (birds), Amphibia (including reptiles), Pisces (fish), Insecta and Vermes (worms and other slimy stuff).  The last edition released by Linnaeus was the 12th version, 2,300 pages long and cataloged roughly 7,700 plants and 4,400 animals.

To me, the coolest thing Linnaeus did was save the world from confusion.  He gave every living organism a two-part name (AKA “binomial nomenclature”) to specifically identify exactly what it is.  He introduced this concept in the 10th edition of Systema Naturae.  Did you know that Ginkgo biloba is the same plant no matter what country you’re in?  A man who only speaks Russian will know Ginkgo biloba; as will an Italian woman.  That’s pretty awesome.  It provides neutrality among countries and languages.

My co-workers know about my affinity for Linnaeus and support my obsession by bringing me baked goods bearing his likeness. This is both fun and tasty.

So the next time you’re thinking about how much you love your dog (Canus lupus familiaris), give him an extra pat for our buddy, Carl.  As for me, I can sleep knowing that my wig-bearing man made our horticultural world a little bit tidier. (Sigh of contentment.)  What a guy.

Hello? It's your Horties Calling!


We are trying something new.  Well, new to us anyway (hello 21st century!).  A group of horticulture agents and campus Specialists across Colorado are blogging to bring you new, timely and interesting horticultural information from Colorado State University and the local Extension Offices.  This blog will hopefully benefit those with an interest in the many facets of Colorado gardening—because we know it isn't easy to have success in our sunny state.  We know this because we flounder as much (or more often) as you do.  The great thing is that every plant we kill, every cultivar we grow without success, every mistake we make, helps you.  At least we like to think it does...

We plan to debunk myths, bring you the latest research-based information from our land grant university, give detail about specific interest areas, and explain why we have certain recommendations, all while having a little fun doing it.

Our plan is to update the blog a couple times a week—more if there is something “newsy” that we need to share.  At last count, there will be 16 individuals blogging, with the encouragement to our colleagues for more participants.  The great thing about Extension is that everyone has an area of expertise—so while Dr. Koski’s news on turfgrass recommendations might bore you to tears, we hope that Alison’s aversion to tomatoes flips your switch (it’s true—she grows them, but refuses to eat them).

We will respond to your comments as best we can, but please be considerate and not attack anyone.  This is an information portal and should be treated as such.  And so, with a simple click of a button….let’s blog!
Posted by CSU Hort Agents at 2:44 PM No comments: