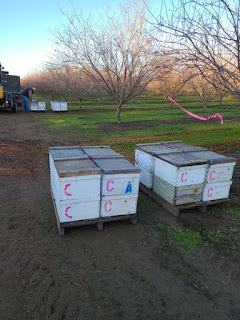 It is time for the almond orchards to start coming in bloom by February and March. Beekeepers from all over descend upon California whose second largest crop is almonds and/or sometimes milk. Why? Almonds are nutritious for honey bees. The pollen provides 10 of the amino acids needed in their diets.
A local commercial beekeeper, from Akron, Colorado called Filla Honey travels each year to Chowchilla, California in South Central Valley. They arrive starting in November to set-up and place the hives and then leave. They make multiple trips until the end of March.  These trips are for feeding and maintenance.  Why so early when almond trees start blooming in February? Bees much like plants need to be acclimated to their new environment.
Their hives are also subjected to California Department of Food and Agriculture quarantine regulations to prevent entry of colonies contaminated with varroa or tracheal mites harmful to the bees. Their hives could be turned away at great cost to their business.
During the process they are met with challenges such as the 4 inches of rain which happened this past week. The soil in some places is a rich clay, and in that much rain things get very sticky. In other parts of the orchards, it is very sandy. 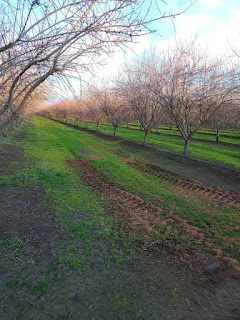 Photo credit: Jessica Filla
The beekeepers strategically place the hives based on the age of the trees. Then wait for them to produce their flowers. The Almond Board in California has encouraged almond farmers to plant pollinator habitat in or adjacent to their orchards for additional food.
How many hives does Filla Honey bring? They bring 900 hives. They are part of a family co-op which adds several hundred hives to that number.  The final total will end up being 4,000 hives that they need to feed and maintain until the flowers start blooming. 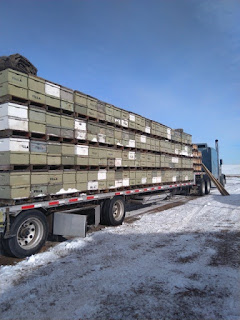 Filla Honey Semi Truck/Photo credit: Jessica Filla
The average cost for the recommended 2 colonies (2 hives) per acre is $400 to lease hives for the almond orchard farmer.  This is for two months of pollination where the bees will use both nectar and pollen from the blossoms.  If the season turns out to be cold and wet, the bees will spend less time outside the hive.  That's bad for business and not just for beekeepers. Why? According to ABC in their data collection of the almond orchards, California produces 80% of the world's almond production. 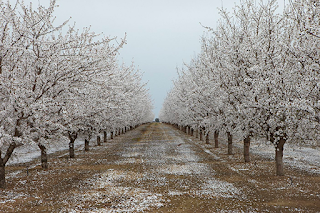 Photo credit: Almond Board of California/ABC
Each semi holds approximately 480 hives.  So just for their initial hives of 900 that makes two semi trucks to California. Each semi has a net over the hives to capture any adventurous bees attempting an escape. 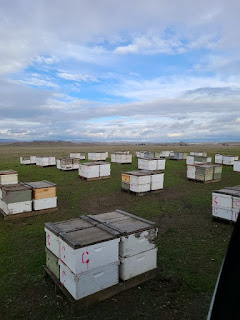 Hives waiting to be placed./Photo credit: Jessica Filla
When Filla honey collects all the honey from their hives it will be a darker honey.  The almond honey can be confused with buckwheat honey since they are both a darker honey.  But very different tastes. Try both honey sometime, if you haven't. You may become hooked.
Posted by CSU Hort Agents at 9:05 AM 1 comment:

Teach a Child to Garden 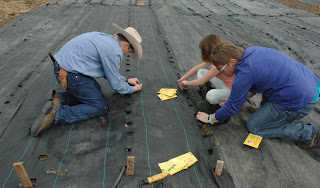