Have you ever been driving, say along a river, in the winter, in the first light of day and noticed that each leaf and every branch on the plants are covered in a glistening coat of frost? I remember such a scene when I had my grandmother with me. She commented on how beautiful the hoar frost was. Even though I had never heard the term ‘hoar frost’, I agreed.

Hoar frost occurs on exposed plants near unfrozen bodies of water (like a river valley). It forms on very cold, clear nights when the air contains enough water vapor to condense and freeze. It forms complex interlocking frost crystals on plants and other surfaces it contacts. These crystals can be quite large and showy and form many different shapes. It usually melts not long after the sun comes out but it is spectacular while it lasts and is worth looking up close!

Rime is a different type of frost that occurs on cloudy nights when snow crystals encounter water droplets in clouds of fog near the ground.  If the water droplets in the fog are supercooled below the freezing point, the droplets freeze on contact to anything they touch. Rime crystals are simpler and more blocky than hoar frost crystals. I think the frost in these pictures is most likely rime but I could be wrong. I noticed these beautiful frosty crystals on a hike in the desert late last winter. 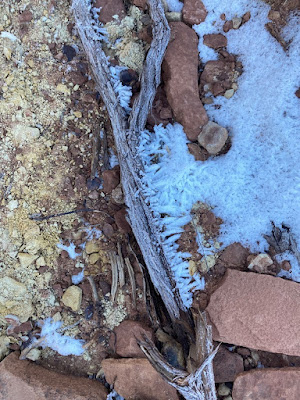 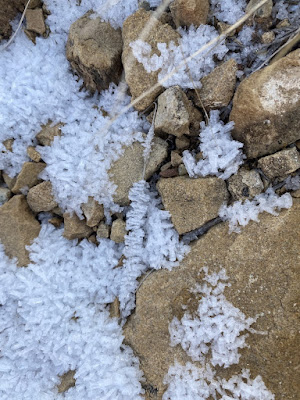 Another beautiful type of frost is windowpane frost. When I was in 5th grade, we lived in an old house in Denver. The windows were single paned glass. Each morning in the winter I would wake up and open the curtain on the window to see if it had snowed. Often there were beautiful patterns of frost on the windowpanes.

There are more types of frost and I am not an expert by any means, but I love that if we look around we can find beauty in the bleak winter.

Posted by CSU Hort Agents at 12:00 AM No comments:

Bulbs and Rhizomes and Tubers, oh my!

This past weekend, Colorado Master Gardeners from across the state tuned in to a virtual workshop all about seed germination, seed stratification, and bulbs. With this information still fresh in our minds, we thought we'd share what we learned with all of you!
So....let's talk about bulbs!
The term "bulb" is often thrown around to refer to underground storage organs that are not, in fact, bulbs. A true bulb is any plant that houses its complete life cycle within its underground storage organ. Examples of true bulbs include tulips, daffodils, hyacinths, and, maybe the easiest example to visualize, onions! All of these true bulbs have the following defining characteristics: modified leaves (otherwise known as scales) that serve to store the plant's energy, a basal plate from which roots grow, the shoot, and lateral buds which can develop into bulblets. Additionally, some true bulbs, called tunicate bulbs, have a paper-like tunic covering, whereas imbricate bulbs lack this tunic covering and, thus, usually need to be kept moist before planting. The easiest way to identify a true bulb? Cut the "bulb" in half and, if it's a true bulb, you should see rings, like in an onion, which correspond to the fleshy scales. 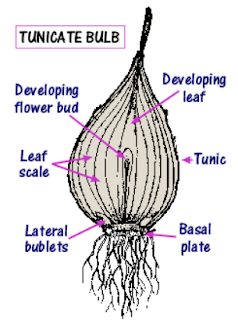 Drawing from University of Illinois; https://web.extension.illinois.edu/bulbs/bulbbasics.cfm.
Of all storage structures, the corm is likely the one that is most easily confused for a true bulb. While they may look alike from the outside, corms don't contain modified leaves as do true bulbs; as a result, if you cut through a corm, you won't see any storage rings. What will you see looking at a corm? You should be able to detect the basal plate from which the roots grow, a growing point from which young buds may be emerging, and a thin tunic. As you can see in the example below, you might also find some baby cormels growing out from the underside of the corm! Examples of corms include the gladiolus, crocus, and water lily.

Drawing from University of Illinois; https://web.extension.illinois.edu/bulbs/bulbbasics.cfm.
True bulbs and corms are both variations of underground stems; another two variations of underground stems include the rhizome and tuber. The rhizome, which includes plants such as the bearded iris, canna, mint, and Bermuda grass, can be recognized by its habit of horizontal growth underground. As you might be able to deduce from some of the listed examples, take caution of rhizomes as they can be quite invasive! Rhizomes produce leaf growth from the topside and root growth from the underside; in contrast, tubers produce both shoots and roots from the multiple eyes that cover the entire tuber. Examples of tubers include potatoes, yams, begonias, cyclamen, and anemone. Tubers are not to be confused with tuberous roots, which bring us to our final type of storage structure. Tuberous roots, which include plants like the sweet potato, dahlia, and day lily, are unlike all the other structures mentioned above in that they are storage roots, not stems. In comparing a sweet potato (tuberous root) and a potato (tuber), the sweet potato should produce sprouts from its "stem end", whereas the potato will produce sprouts from its eyes. 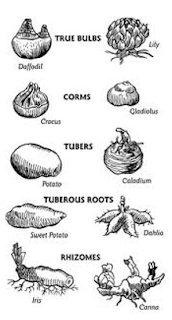 Schematic from University of California; https://ucanr.edu/blogs/blogcore/postdetail.cfm?postnum=12565.
Did you plant any of the above-mentioned storage structures this fall in preparation for next season? Which kinds of storage structures did you plant? Let us know below!
References:
https://web.extension.illinois.edu/bulbs/bulbbasics.cfm
https://ucanr.edu/blogs/blogcore/postdetail.cfm?postnum=12565
https://gardeningsolutions.ifas.ufl.edu/plants/ornamentals/is-this-a-bulb.html
https://extension.uga.edu/publications/detail.html?number=B1489
https://propg.ifas.ufl.edu/07-geophytes/02-othergeophytes/09-geophytes-tuberousroots.html
Posted by CSU Hort Agents at 4:35 PM No comments: