A robust relatively new perennial to many Colorado gardens is the genus Helleborus. The leathery leaves which are mainly evergreen are a great addition to any shade or part-sun garden. They are native to temperate forest region of Eastern Europe ad West Asia. Most of the Helleborus sold in garden centers in Colorado are hybrids making them more vigorous, colorful and adaptable.


Common names like Christmas Rose or Lenten Rose give hints to this plants unusual bloom time which is often in very early spring.  Often, they are blooming late January into February in Colorado.


In our trials if the Helleborus look a little ragged after a severe long winter, one can cut back to get a nice rejuvenated plant. In particularly severe winters where there is a little snow cover or rainfall, some leaves will die back to ground unless the plant are irrigated during the dry period.  However, after first spring snow or rain they start to bloom.


Flower color is quite diverse, ranging from deep purples to creamy whites to even lime greens.  The petals persist for months allowing for color throughout the spring.  Mature Helleborus are long lived and can grow to about 18 inches tall and 24 inches wide.


In our three year perennial trial at Colorado State the Gold Collection® which we obtained from Skagit Gardens has had great winter survival (close to 100%).  They are also planted in an area where we have no winter irrigation available except snow cover and about six hours of winter sun daily.


Two varieties in the Gold Collection® series were praised for their early blooms in February to March:  ‘Cinnamon Snow’ had flowers with a deep pink blush with a yellow interior and ‘Pink Frost’ had flowers with a light pink blush on chartreuse petals. These plants held their flowers facing more upright toward viewers than other Helleborus. Also, the dark green foliage looked good all year long in Colorado’s low humidity.  They are a great groundcover for a shady area. 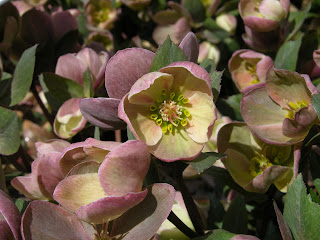 Another Top Performer from our 3 year perennial trial in 2017 was Winterbells® Helleborus from Hilverdakooij (Helleborus interspecific ‘JWLS’).  This Helleborus had the unique ability to bloom from early spring till late summer.  It adds a touch of elegance to the garden with a classic white flower, attractive glossy foliage and a very dense, compact growth habit.  The nodding flowers change color over the season but the foliage can be evergreen in a protected area for year round interest.  The flowers are also useful for cut flower production.

If you are looking for an unusual early blooming perennial, try considering Helleborus. With more varieties being introduced yearly it will become more of an staple for Colorado perennial gardens.