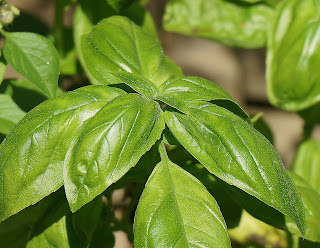 August is a time that separates the wheat from the chaff, when vegetable gardeners can tell if a season is successful or a bust.  Though you might not be hauling in record breaking harvests in everything you plant, usually you have a few items that are the stars of summer.

This year is particularly telling on a gardener’s skill, with a cold start followed by record heat, and as I assess my vegetable patch, one thing becomes clear:  I can’t grow a darned thing this season.  The peppers are puny and eggplant nearly nonexistent; the spinach, lettuce, and broccoli bolted so quickly I pulled them before we got to eat them.  My squash is beset by squash bugs and the potatoes - though sky-high in growth - probably won't yield much.

In response, I’m complaining about it, which in hindsight was not a good thing to do when talking about a paltry harvest.  Like scenting the weakest of the herd, other gardeners seized the moment, soothing my pain by gifting me with photos of their bountiful harvests.  Now I find myself bereft of garden produce and green with envy.

Thank heavens for basil, or I’d be petitioning the Governor to have my garden declared a disaster.  Basil (Ocimum basilicum) has boomed this summer, producing an abundance of fragrant, sweet leaves on plants that have shrugged off the extreme conditions.

Originally from the Asian areas of Thailand, Pakistan, and India, basil is popular in Italian, Thai, Mediterranean, and other cuisines.  Grown throughout history, it’s the root of interesting superstitions, such as being able to spontaneously transform into a serpent if crushed and left under a stone, or if eaten, turn into scorpions that infest the brain.  These things make me wonder why people eat certain foods.

Other cultures considered basil more fondly:  Hindus consider it a symbol of protection, Italians a sign of love but some use it as a pest repellent, which shows just how confusing love can be.

Culinary basil comes in many forms, and cooks who enjoy diverse cuisines should indulge in planting sweet, dwarf, Thai, African, citriodorum, or purpurascens types.  Citriodorum, such as New Guinea or Sweet Dani, are lemony flavored plants; Purpurescens are the purple leafed varieties that taste like the classic green basil.

If you’re interested in traditional sweet basil, pop in Cardinal, Pesto Perpetuo, Genovese, or super-size with Lettuce Leaf or Green Ruffles; their enormous leaves are excellent in salads.  Smaller leafed types can have a peppery kick to their leaves.

The Thai group, with varieties like Siam Queen or Cinnamon, has a surprisingly fruity, licorice-like, or spicy flavor.  The African group are boldly distinctive and often better suited to potpourris rather than food.   African Blue, a hybrid between Dark opal and Camphor basils, is stunning in the garden with spires of lavender-colored blooms. 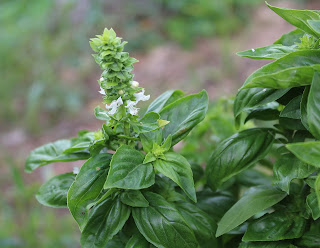 Most basils grow in full sun here, but a touch of shade is helpful during the hot summer.  Harvesting it is simple: pinch off the leaves just above the bottom two to four sets of true leaves.  Leaf flavor is best just prior to bloom, but you can pinch off and use the flowers in salads also.