Native plants support insects (the bottom of the food chain)

Mark your calendars for the 3rd annual Landscaping with Colorado Native Plants Conference!  This year, it will be at the Denver Botanic Gardens on Saturday, Feb 10, 2018.  We will have two main tracks, filled with great speakers:  New to Natives and Knows the Natives.  Registration should be open Dec 1 at landscapingwithcoloradonativeplants.wordpress.com.  We have sold out the last two years, so get your registration in early (maybe Santa could give you a seat in the conference?) 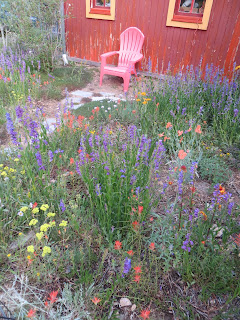 And here is why it is so important to plant more natives:
A study from Germany just came out (http://journals.plos.org/plosone/article?id=10.1371/journal.pone.0185809) , and it has scary implications for both insect populations and the entire food chain.  The authors found that in just 3 decades, flying insect populations in German nature reserves have plummeted by more than 75% (as measured across all taxa by biomass). The authors state that this “loss of insect diversity and abundance is expected to provoke cascading effects on food webs and to jeopardize ecosystem services”. The reasons for the decline aren’t clear, but the pattern is consistent over a swath of western and northern Germany, from the region around Bonn and Cologne to the countryside south of Berlin.

The scientists speculate that climate change, habitat loss and fragmentation (including agricultural intensification), and deterioration of habitat quality may some of the prime suspects responsible for the decline.

For you fellow birders out there, the implications of the loss of insects to bird populations is more than a little distressing. Many bird species eat flying insects for their entire life cycle, and almost all birds (even frugivores or seed eaters) must raise their chicks on soft-bodied insects. Indeed, the German environmental organization Nature and Biodiversity Conservation Union (NABU) estimates that more than 25 million birds disappeared from Germany over the past 12 years (about 15 percent of the country’s total bird population), and while the causes are not well-studied, habitat loss (including the insects that sustain them) is the most likely reason.  It is not just limited to Germnay; we are seeing similar losses to our bird populations- A study (http://www.ace-eco.org/vol5/iss2/art1/) by Canadian biologists, published in 2010, suggests that North American bird species that depend on aerial insects for feeding themselves and their offspring have suffered much more pronounced declines in recent years than other perching birds that largely feed on seeds.
Don’t despair, however. Restoring the bottom of the food chain by planting native plants can do a lot of good. The effectiveness of planting native plants is demonstrated by years of research by Doug Tallamy, whose published work (http://www.bringingnaturehome.net/). He has shown that native plants host many more caterpillars than non-native plants, and that yards with more native vegetation host more native-bird species. His work (and of course, that of his grad students)  (http://www.sciencedirect.com/science/article/pii/S0006320717305153), shows that yards filled with native vegetation offer more food for nesting birds than non-indigenous species. Another study of suburban properties in southeast Pennsylvania found that there were eight times more Wood Thrushes, Eastern Towhees, Veeries, and Scarlet Tanagers (all species of conservation concern) in yards with native plantings as compared with yards landscaped with typical alien ornamentals. 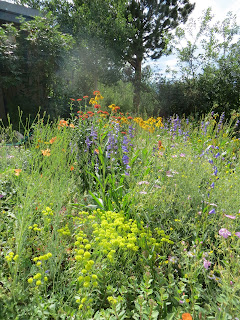 The good news here is that we can make a difference in our own backyards by adding native plants. And there’s no need to be a purist. No need to rip out all of your non-natives, just add natives!  Also, consider raising your tolerance level for insects and holes in your plants. For the most part, these are not a problem, and rarely get to the point of needing any action. And, viewed from a distance, it’s hard to see a couple holes. As one person puts it, “if there aren’t holes in your plants, you’re not feeding the birds!”  I have many birds in my most-native garden, and I never see intolerable levels of insects (probably because the birds are eating them all). If all of our yards helped to replace lost habitat and supported pollinators and birds, we may help reverse the tide of extinction. That gives me some hope.

For planting guides and ideas, here are some good places to start:

o   You’ll find a guide to help you (even includes some designs!) for the Front Range, the mountains, the Western Slope, SE Colorado, and the Plains and Prairies.
Posted by CSU Hort Agents at 8:00 AM