This summer, the Jeffco PlantDiagnostic Clinic in Golden has had a rash of strangely similar cases.  Here are descriptions of three plant crime scenes with eerily similar “MO’s”.  Can you solve them?

Case Summary:  three plants submitted to find out what was infecting them. 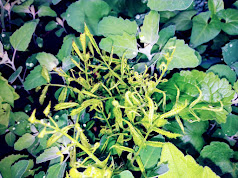 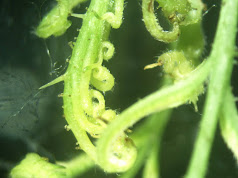 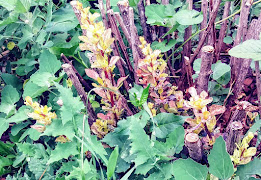 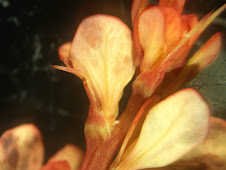 The homeowner reported in the cultural history of the samples that the damage pattern had been observed beginning in 2020.  The history also listed that a 3-in-1 (insect, mite, disease) pesticide had been applied in 2020 and 2021 to treat for mites, based on a recommendation from a local nursery.  The cultural history indicated that no herbicides had been applied in the yard.  With no leads on biotic (living) causes of the plant deformation, and no history of herbicide use, we evaluated the 3-in-1 pesticide.  It contained 3 active ingredients:  Imidacloprid (insecticide), Tau-Fluvalinate (miticide), and Tebuconazole (fungicide).  Of the three, Tebuconazole has been reported to cause phytotoxicity in some studies.  The grape Eutypa dieback is rare in Colorado.  Boxwood blight has not yet been detected in Colorado, so is very unlikely.

Verdict:  no verdict reached.  It’s possible that the phytotoxicity/deformation was caused by Tebuconazole, but it was just as likely due to herbicide drift or vaporization from a neighboring yard.  To prove the Tebuconazole was the culprit, the plants would have to be tested for the chemical, a pricey investment.

Case summary:  the clients worried because their tomato plants were not thriving.  Their plants were much smaller than the ‘sister’ plants that were growing in Greeley, CO at a family member’s farm.  They were concerned that they were over- or under-watering. 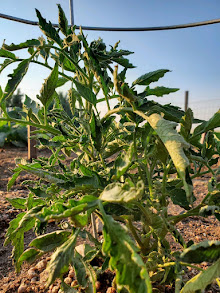 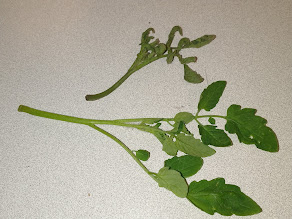 While walking the property, we found multiple other species of plants showing distortion and strapping of new growth:  grape, chokecherry, Blue-mist Spirea. 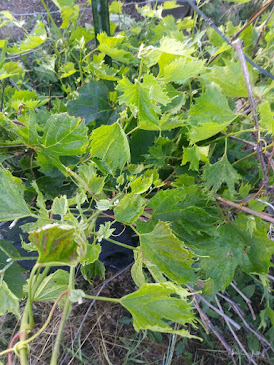 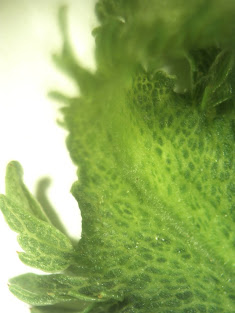 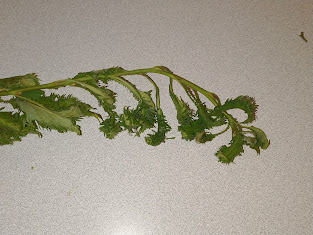 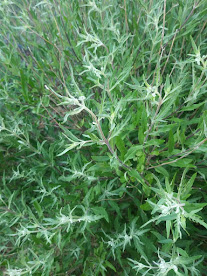 The client had sprayed a 2,4-D-based broadleaf herbicide with a backpack sprayer on weeds in the grassland adjacent to the house, but felt that the herbicide had been sprayed within the temperature and wind-speed limits.  There are corn and wheat fields within 5 miles of the damage where herbicides may have been used.

Verdict: Sub-lethal Herbicide damage due to herbicide drift, likely from the local spraying, but drift from neighboring properties cannot be ruled out.

Case Summary:  a client submitted photos of tomatoes and grapes that showed leaf distortion, strapping, and vein clearing.  He wanted to know what disease was causing the problem. 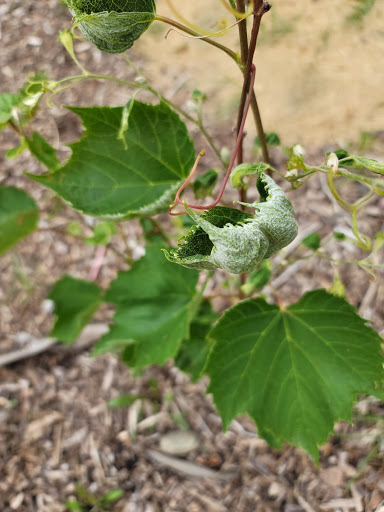 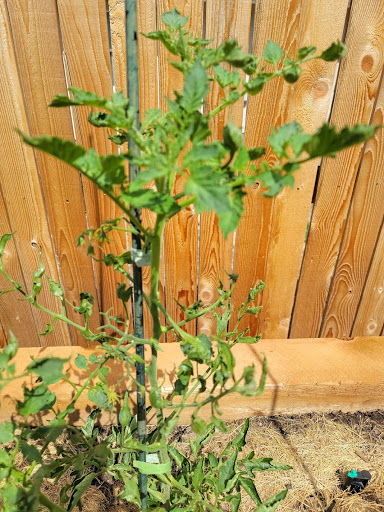 During discussion the client reported using 'Weed B Gon' herbicide on lawn weeds, but not near the garden plants.  He also reported using lawn clippings as mulch for both the tomatoes and the grapes.

The active ingredients in Weed B Gon are 2,4-D, Dicamba, and MCPP-P.  All three are growth regulator- type broadleaf herbicides that affect plant growth processes, such as cell division, protein production, and respiration.  At a high concentration, they kill the plant; at sub-lethal concentrations they cause plant distortion.  These herbicides can be carried by clippings, as well as compost made with treated plants.  When applied as mulch, they can leach into soil and be taken up through the roots of mulched plants, causing damage from the bottom up.  Grass clippings make great mulch for a vegetable garden, but not when the grass has been treated with growth regulator herbicides!

What is the common MO?   All three of these cases involve similar phytotoxic symptoms on multiple species/families of plants that are consistent with phenoxy- herbicide damage.  Most plant pests and diseases are pretty host specific, causing damage to only one kind of plant or to closely related plants.  Abiotic disorders such as herbicide damage typically cause problems across multiple kinds of plants.  The plant distortion in these three cases is typical of damage caused by the growth regulator herbicides, also known as the ‘phenoxy’ herbicides.  These herbicides can cause off-target damage due to drift, vaporization, overspray, and root uptake when not applied carefully. Grape and tomato plants are very sensitive to even small amounts of phenoxy herbicides -  the ‘canary in the coalmine’ for phenoxy herbicide damage.

To avoid damage, always follow all label instructions exactly:  the label is the law!  Apply when wind is below the specified speed (drift), temperature is below the specified limit (vaporization), and equipment is working properly (overspray).  Take care not to transfer treated plant material to planting beds.

While Scenes 2 and 3 can be solved based on circumstantial evidence, Scene 1 will remain an ‘unsolved mystery’!