You know the saying, “What doesn't kill you will make you stronger”?  Well, I feel like this cold frame experiment is really putting us to the test.  Just when we feel like we've got a good system in place, we get another slap across the face as a wake-up call.
We've improved the R-value of the cold frames in a more sustainable and storable way than rigid construction insulation – space blankets.  I can’t claim credit, other than finding CSU Garden Notes #722 written by Carol O’Meara and David Whiting.  Having made it through the brutal cold spell with our rigid insulation and our only 4 strands of incandescent Christmas lights in the lettuce/spinach boxes (2 strands/box), I ordered some space blankets and got more strands of incandescent Christmas lights from Craigslist.  I made 2 wickets for each box and we put one strand of Christmas lights in the beet box and one in the carrot box.  (The lettuce boxes already had two strands, as reported previously).  Then we laid the space blankets on top of the wickets inside each box, clip the space blankets to the wickets with clothespins (talk about high tech), and we have the lights on timers set to go on for one hour each night.  This keeps the cold frame temperature in the 30s and prevents the ground from freezing.  So this solution is a keeper.  We do realize that when nighttime temps drop lower, we have to keep the lights on longer to maintain our target 32+ degree temperatures, but we haven’t had any more brutal cold nights recently (though that will change soon).
One exciting result of our cold frame experiment was that this was the first time that Tom was able to make his homemade, from-scratch, holiday spinach, ricotta, and mushroom ravioli using home-grown, fresh spinach.  He was very excited by harvesting the spinach himself and I’m very excited by the thought of eating all that yummy ravioli.  Truth be told, I’m hoping the fact that there’s lots of spinach left will motivate him to make another batch.

I do have to admit, though, that we’re really scrambling for yummy recipes for the beets.  In theory, planting so many was a good idea but in practice, our recipes are a bit sparse.  So if anyone out there has a good recipe they’d be willing to share, I’d be very grateful. 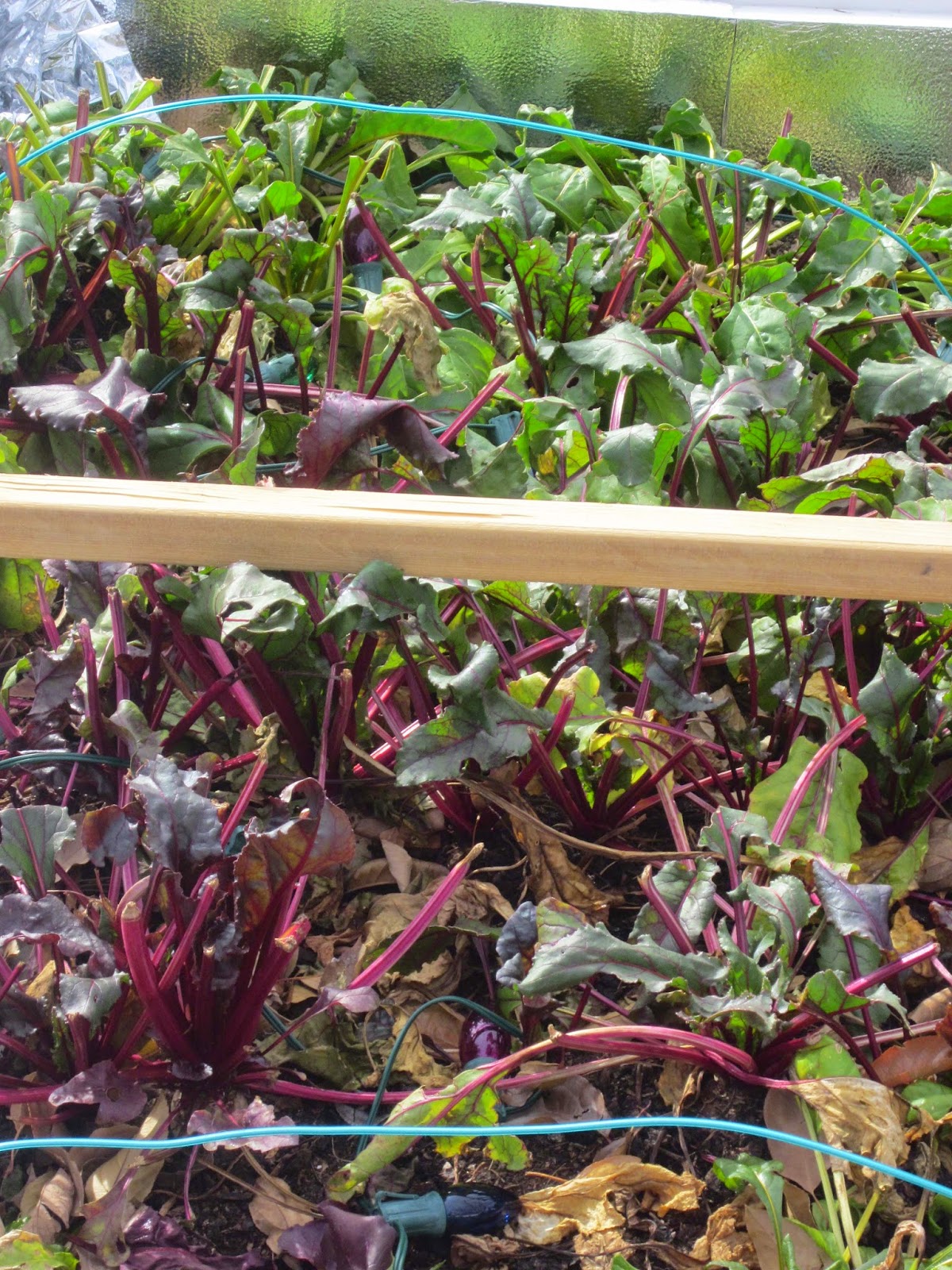 But a few weeks ago, we had a spell of extremely windy weather that lasted a few days and nights.  It’s no big deal to keep the boxes covered in the day if the cold frames aren't getting too hot inside but with the wind, we had at least one mirror clip snap off and the polycarb top blow off and out into the yard during the day.  OK, so that afternoon, we just carefully put a 10lb piece of flagstone on the corners of the polycarb.  Sounds good, right?  Yeah, well don’t underestimate the power of a 70 mph wind.  Let’s just say it was lucky Tom was up late watching TV and heard the top blow off, despite the rocks.  We went out in the dark with flashlights (note to self:  future improvement is an outdoor light near the garden area), me in my pajamas (yikes!), and retrieved the polycarb top, piled more rocks on all the boxes, & told ourselves “Done.”

Well, not so much.  About 30 minutes later, another top blew off.  So we retrieved it and decided to employ “the nuclear option” – a piece of redwood across each piece of polycarb with a cinderblock at each end of the redwood holding it down.  Talk about a pain.  Putting this in place every afternoon and taking it off every morning was a major endeavor, requiring two people.

We’re hoping we have a better solution, suggested by our beekeeper friend Alfred – ratchet straps.  We’ll use two per box, running from end to end along the long (6’) side.  It did mean we had to gently lift the box up so we could slip the straps underneath.  But if it holds the polycarb in place, it could be an easy, one-person solution.  We have to get straps on the other boxes because we’re sure to have windy weather again sooner or later.


Today, we harvested everything that was outside of the boxes.  Let’s just say the results were mixed.  Carrots were fine – we’d covered the shoulders with an inch of home-made compost.  But the only beets that were OK were the ones that were also completely covered.  More experienced veggie growers than we would know that any with exposed “shoulders” were rotten.  Oh well, c’est la vie.  We lost many of the leeks because we didn't have a cold frame for them in time and we lost any of the beets whose “shoulders” were exposed.  But we still have loads of lettuce, spinach, carrots, and beets inside the cold frames and that’s more than we had at this time last year.  And after all, it’s an experiment … we’re learning, evolving, and modifying our approach.  Hopefully, we can hone things so that next year we have more successes and fewer failures (or shall I call them “opportunities to learn”?)