Aspen, cottonwood leaf diseases not lethal to trees, but could impact fall colors 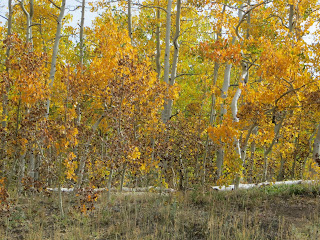 FORT COLLINS, Colo., – Some stands of aspen and cottonwood trees across northern Colorado and along the Front Range won’t be their most picturesque this fall, due to leaf spot diseases that benefitted from an unusually wet spring and early summer. For about the past month, foresters have been seeing an unusually high degree of leaf blight in the mountains and along the Front Range, as far south as Aspen, the Collegiate Peaks and Colorado Springs.

At least two fungal diseases are to blame for the leaves now showing significant spotting or dark splotches. Marssonina leaf spot is caused by the Marssonina fungus and is the most common leaf disease of aspen and cottonwoods in Colorado. The disease can be identified by the presence of dark brown spots or flecks on leaves, which can then fuse into large, black splotches on severely infected leaves. Also active now, mainly on Colorado’s cottonwoods, the Septoria fungus initially causes tan spots that become irregular brown-to-black spots coalescing to cover much of the leaf by late summer.

“The good news is that these diseases rarely cause any permanent tree damage or death,” said Dan West, entomologist for the Colorado State Forest Service. “But this is the highest level our foresters have seen in many years for some parts of the state.”

These fungi typically develop during wet, cool weather and generally cause only aesthetic tree damage. However, severe disease outbreaks occasionally cause some defoliation or dieback on impacted trees. West says trees with these leaf spot diseases can display noticeably less vibrant colors and can drop leaves prematurely, but often are mixed in among stands of healthy trees, so there should still be plenty of beautiful Colorado foliage for fall viewing.

Fungicide sprays can prevent new leaf spot infections in the spring, but will not cure trees that are already infected. Because these fungi overwinter on fallen leaves infected the previous year, West says the best management option for homeowners this fall is sanitation. Get rid of any diseased material by raking up and disposing of infected leaves and twigs, to reduce spread of the disease next year. Also, always try to keep tree leaves as dry as possible to reduce future incidence of leaf spots by watering early in the morning rather than at night, and by keeping sprinkler patterns set to prevent over-wet leaves.

Regarding landowners with larger areas of aspen or cottonwood – of a scale that makes most management options impractical – West says maintaining space between trees helps prevents moisture from lingering too long on the leaves.

“This is a natural phenomenon, and despite how they look, these trees should leaf out again next year,” he said.

For more information about leaf spot concerns for aspen, cottonwood and other poplar species, go to http://www.ext.colostate.edu/pubs/garden/02920.html.
Posted by CSU Hort Agents at 9:24 AM