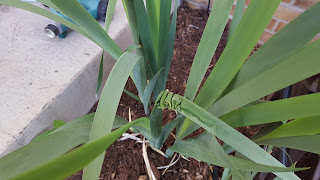 Thanks for you comments...I laughed at the response that the plant didn't wear sunscreen (a good reminder to all of us!) and Dr. Steve Newman said a fellow Twitter follower said it was a result of listening to Lawrence Welk music.

My best guess...which was supported by fellow CO-Horts Mary Small and Tony Koski...is that it's most likely freeze/chilling injury. Since it was the third leaf on both sets of plants, it led me to believe that these plants were damaged either in the bud or as they were emerging. The plants are located close to the home and are always early to emerge, so it was likely during one of those cold snaps we experienced in late March or early April. Also the leaves were likely constricted during emergence, which led to the accordian-fold.

But if anyone has any other thoughts or reasons as to how this may have occurred, I'd love to hear (and be corrected).
Posted by CSU Hort Agents at 10:36 AM