As you’ve probably guessed, this is not about the cold beverage made from oval yellow fruit. It’s about those not-so-nice things that sometimes happen in the landscape.

I planted a climbing yellow rose (can’t remember the name) in the garden. It performed beautifully for several years. Yes, it had some winter dieback every year as roses do in our climate, but nothing like what happened following the November 2014 polar vortex. That took the whole thing out.
I didn’t get around to digging it up last year and it sprouted from below the graft union.  Since I was going to take the thing out, I just ignored it and I think it ignored me, too!

This spring, before I got around to digging it up, the canes rewarded me with the most beautiful apricot colored, fragrant blossoms! The little garden adjacent to the rose is dreamy with its scent. And to think I almost destroyed it!

We used to have a 10 year old catalpa in our front yard. It looked kind of like a Dr. Seuss tree as the top had been broken out of it. But it provided wonderful, cooling shade. A few years back, an early fall snowstorm broke out so many branches that it finally had to be removed. We replaced it with a small oak tree and complained about the lack of shade.The oak has only been planted for three years, but it has put on more yearly growth than I ever expected. Now that catalpas are blooming, I’m reminded that I don’t have to rake up their flower stalks, leaves and seed pods anymore!
Alison O’Connor, one of our bloggers, lost a large maple in a tornado several years back. But it 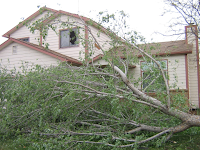 gave her the opportunity to plant other trees and plants that she wanted to grow. Just look at the before and after pictures. I think you’ll agree the tree loss was really a net gain.


Alison also lost her vegetable garden in a severe hail storm. (Are we seeing a pattern here?) She turned the loss into lemonade by planting a cover crop – which improved her soil for the next season.


Sometimes those gardening “mishaps” or “missteps” actually turn out better than expected...or planned!