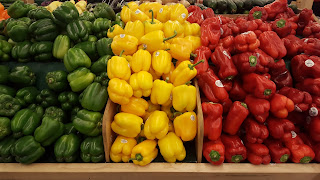 Recently, fellow hortie Carol O'Meara sent an email to a few of us with a link to a blog that advised people on how to choose the best eggplant--based on if they were a "boy" or a "girl". Yes, really. Now, I had heard of the myth of boy peppers and girl peppers, but never eggplant. And let me tell you--it's all bunk. There are no boy peppers or girl eggplants.

(I'm taking a deep breath...this gets me worked up.)

Peppers
"Girl" peppers have four lobes and "boy" peppers have three lobes. Girl peppers are sweeter, but contain more seeds. Boy peppers have more "meat" and are better for cooking.

Eggplant
"Girl" eggplant have a slit at the base of the fruit and "boy" eggplant have a "bellybutton". Girl eggplant, like peppers, have more seed, which is bitter tasting. Boy eggplants taste better because they have less seed.
Ok, so back to science. It is botanically impossible that these fruit have a sex. They can't. When the plant flowers, the flowers contain both male and female parts, known botanically as "perfect" flowers. The fruit develops from the ovary. Yes, the pepper and eggplant fruit are ripened ovaries. But the fruit itself is not sexed.
Now, there are some plants in the world that are male or female. For example, my favorite tree, the ginkgo, has male and female trees. The females are the ones that produce the horrid-smelling fruit. Fortunately, only male clones are sold in the nursery trade today.

But back to the peppers and eggplant...

Peppers can have two, three, four or even five lobes on the bottom. They will vary by cultivar. It also comes down to consumer preference. If you're making stuffed peppers, you look for a pepper that can sit well. If you're just chopping it up for a salad, three lobes may suffice. Many chile peppers have two lobes.
Now why the eggplant bottoms vary, I couldn't tell you. But it's likely from environmental conditions, cultivar, growth rate or other things. It's just nature. It's how it grows. Just like no two humans are exactly alike, our peppers and eggplants differ. Please stop spreading this erroneous myth. It's silly and quite honestly, one that causes horticulturists to have our eyes roll back in our heads.