This fall, I took a big life step and purchased my first home. Sadly, when the move took place, I had to leave behind many of my plants, and my compost pile. Bummer. Right when I was really starting to feel the void my lost compost pile was creating in my life, one of our Master Gardeners taught a composting class, and turned me on to vermicomposting.

Vermicomposting, more commonly called worm composting, is so easy that even someone completely absorbed by a new “fixer upper” can do it! It takes hardly any space, it’s super cheap to get started, and it is less labor intensive than a traditional compost pile. The worms really do all the work. Here’s what you need to know to give vermicomposting a shot…

The first thing you need is a worm bin. It is incredibly easy to make one out of two plastic storage containers. I like the 3 gallon Rubbermaid Roughneck containers, because the handles prop up the top bin up so that there is space between it and the bottom bin. You will need a drill and a couple different sized drill bits, as well as some screening and glue.

To begin, drill holes along the bottom and the lower sides of the inner bin (the one the worms will live in). These holes will be for drainage in case your bin becomes too wet. Don’t drill holes in the outer bin, which is used to catch any liquid that leaks out. I used a 1/16 inch bit for the drainage holes. Next, use a larger bit (1/4 inch) and drill air holes near the top of the bin.

The larger air holes are big enough for a sly worm to escape out of, so they need to be covered. Use a nontoxic, water proof glue to adhere aluminum insect screening over the holes. The glue will need to dry before moving on. I used large binder clips to hold the screen down while the glue dried. Warning: don’t let the binder clips touch the glue, or they will rip the screening off once you remove them. Yes, I am speaking from experience. You can decorate your worm bin if you are feeling crafty. Our local composting guru made these awesome “Compost Happens” bumper stickers that I used to liven mine up. 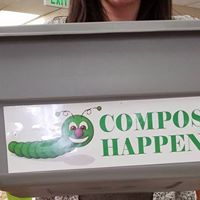 Next, you will need to get worms. Red Wigglers are the best for worm bin composting, because they adapt easily to new environments, and they reproduce faster than the earthworms in your yard. You can buy them online, or if you are lucky like me, you have friends with worms to spare! You should only need a handful to get started, they will make more as time goes on. One pound of Red Wigglers can break down 3-5 pounds of kitchen scraps a week.

Now that you have your worms, you need to prepare the bedding. I used shredded newspaper. You want to wet your bedding until it is as moist as a wrung out sponge. It is best to moisten the bedding in small layers so that it does not clump up. The worms should be able to crawly freely through the moist, shredded paper.

Once the bedding is properly wetted, you can sprinkle the worms right on top. They will work their way down into the bedding to avoid light. The worms will start to feed on the bedding. It is best to let them get acclimated to their environment for a week or so, then start adding food scraps, slowly at first. You could end up with a smelly bin if you add too many scraps too fast.

When you add scraps, pull back a small amount of bedding on one side and bury them underneath, then cover the scraps back up with the bedding. Do this in a different spot each time, and by the time you get back to the first spot, the worms should have composted most of the scraps.

As far as what you should add to your bin, it’s pretty much the same as a traditional compost pile. Try and keep your carbon (bedding) to nitrogen (scraps) ratio pretty even. Don’t stress too much about this, composting doesn’t need to be an exact science, remember what our Master Gardener says, “Compost Happens”! Kitchen scraps can include fruits, veggies, coffee grounds, tea bags, and peelings. Avoid meats, fats, and dairy as they are a recipe for a smelly bin.

So once your worms have done their job and you have compost, what do you do with it? The volume will be small, but you can use it just like any other compost. Add a handful to the base of your houseplants or garden plants. You can also mix it into potting soil when repotting. Research has also shown that adding a little to your seed starting mix will give you stronger seedlings.

I hope you are inspired to start a little worm colony of your own. Mine worms have become the office pets, and they get everyone’s lunch scraps. Here are a couple of helpful links with further information: http://lancaster.unl.edu/pest/resources/vermicompost107.shtml, http://www.ext.colostate.edu/sam/vermicompost.pdf.  Happy composting!
Posted by CSU Hort Agents at 8:23 AM