Native Plants at the Confluence of San Miguel and Dolores Rivers, Western Colorado

by Yvette Henson
CSU Extension has a program called Native Plant Master.  Since 2007, our county has participated in this program by offering classes for Native Plant Master Certification as well as offering single, day-long Native Plant Education Classes (field trips).  Our longest running class is held at the confluence of the San Miguel and Dolores Rivers in extreme western Montrose County.  Except for our first course, in 2011, we 've held the class on the 3rd weekend of May.  Holding it on the same general date has allowed us to see slight variability of plants in bloom and bloom times, based on the weather conditions leading up to that season. 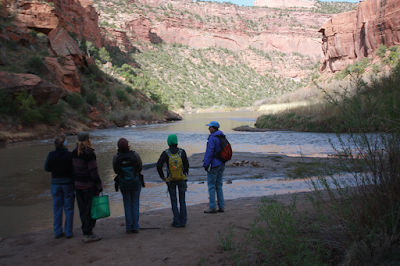 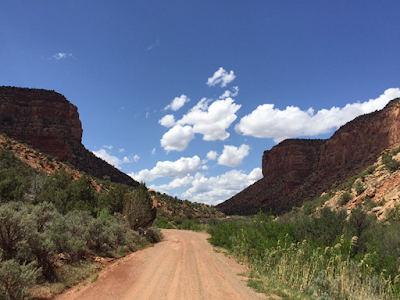 Along the River Road (Photo credit Yvette Henson)
In this blog I will highlight just a few of the most interesting native plants (at least to me).  The first is single leaf ash, Fraxinus anomala. The specific epithet refers to the plant being an anomaly because it has a simple leaf instead of a compound leaf like all the other ashes.   It is a small tree with shiny golden-green leaves and non-descript flowers that are followed by somewhat showy samaras.  The blooms have a lovely fragrance, reminiscent of sweet olive (Osmanthus fragrans), a plant in the same family (Oleaceae) that is grown in the Southeastern US. 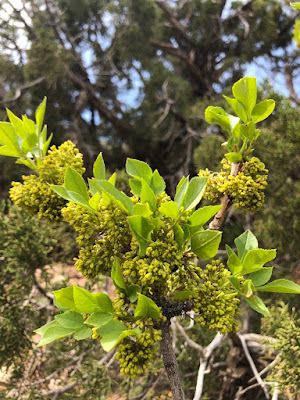 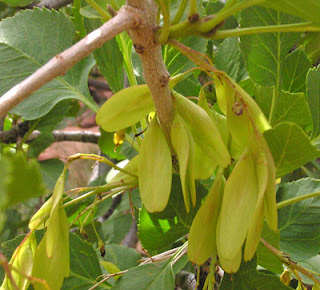 Single leaf ash samaras (Photo credit Al Schneider, swcoloradowildflowers.com)
During our first class in 2011 we saw an interesting plant in the pea family (Fabaceae) that we had never seen before.  It turned out to be a rare plant found only in Delta, Mesa and Montrose counties.  It is called Grand Junction Milk vetch, Astragalus linifolius.   This is a beautiful, upright-mounding herbaceous plant with white flowers that have a purple spot on the tip of the keel.  Previous years dead stems persist at the base of the plant.  We look forward to seeing this plant every year and this year it was in full bloom on the day of our class. 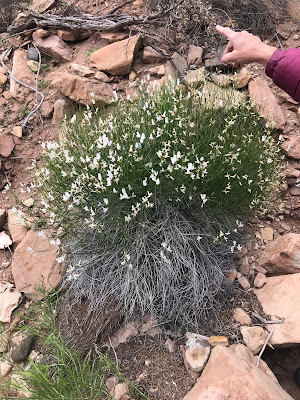 Astragalus linifolius, Confluence Native Plant Class, May 17, 2019
(Photo credit Yvette Henson)
Another rare plant that is a close to my heart is alcove or mancos columbine, Aquilegia micrantha.  It grows in cool, moist cracks of the red sandstone of the washes and side canyon walls.  We’ve only seen it in one area but a student in this year’s class who drives that road frequently has seen it along the road, again in cracks in the sandstone.  Our population has delicate looking blooms in pale yellow, some with more red on the spurs than others.  Other populations can be whitish.  The leaves are thick and glossy and sticky to the touch.  I couldn’t find my photos of this plant so I used one from Al Schneider, swcoloradowildflowers. 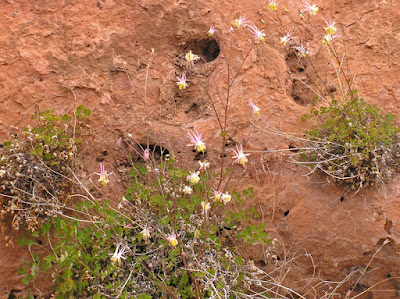 A beautiful site we saw this year was a ‘super bloom’ of Heliotrope phacelia, Phacelia crenulata.  It covered a large expanse of hillside along one portion of the River Road.  These photos were taken by a class member, Bill Grimes, on the day of our class, May 17, 2019.   The first photo is a snap shot of the expansive bloom covering the hillside  (its difficult to get the actual effect!) and the second is a close up of a single plant. 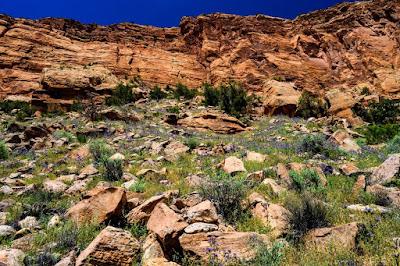 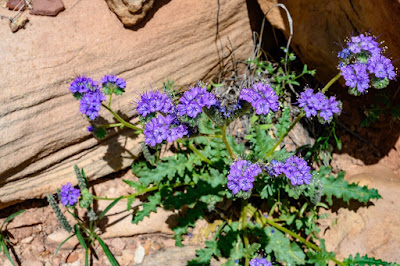 As a side note, for western Colorado native plants, I highly recommend swcoloradowildflowers.com for the beautiful pictures and identification information.  I believe Al is using names from the Flora of North America.  The names of plants in this blog are from the Flora of Colorado by Jennifer Ackerfield.