In Akron, Colorado, we have a demonstration garden that shows the public what plants can tolerate an extended drought and still survive.  In some cases, even do well.  Last year we applied for a Colorado Garden Show Grant and received funding to renovate the garden.  It was first implemented in July 2005 by a now retired CSU Horticulture Agent, Joanne Jones.

Since 2005, we have watched the garden through the seasons to see which plants were able to tolerate the conditions and which plants did not.  The plants received supplement precipitation from Mother Nature.

The plants that survived and did the best are listed as follows: 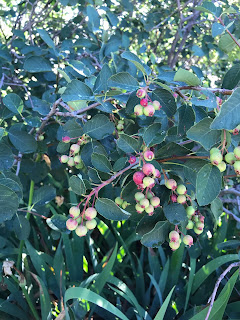 Squaw apple is in the rose family and is also known as wild crab apple.  It has endured without any extra care.  This could make a great hedge or backdrop for a garden.  It gets four to six feet tall. It attracts birds, bees and butterflies. 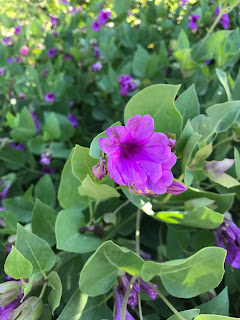 This is a no muss, no fuss plant.  Once it gets established it can seed itself in other places, but in our garden it has never been invasive.  It is a deep-rooted native plant.  It is filled with flowers from late May through the end of summer.  The flowers open in the afternoon.  It is hardy to zone 4.  It grows to 18" tall and spreads to 72" wide.  I would consider both of these plants underused.  They are great for conserving water.

The new plants that we were able to implement in the garden are as follows:

It is hard to pick a favorite or two from this list.  They are all great plants, especially when it comes to drought tolerance.  I really like the blossoms on Blue Mist Spirea.
We ended up having chosen the right season to renovate this garden.  We had snow a week after the plants were in the ground.  Then we have had rain almost weekly or more through the season.  All the plants did well from the 29 degree Fahrenheit day with snow on the ground through this wet season.

This garden is placed along our walking path in the Washington County Fairgrounds.  We also have placed a free library to hold our brochures, other Extension information and have a horticulture book exchange.

Without the funding from the Colorado Garden Show, this would not have been possible to give this garden a new "facelift".  We had community volunteers, Akron High School Science Students, Colorado Master Gardeners, office staff and the town workers, even the neighbor by the walking path participated in the renovation.  That is what makes a community.  As the garden grows I can take more photos and share them in a 2020 blog!  Stay tuned.....
Posted by CSU Hort Agents at 9:30 AM