Temperature is the largest limitation to wine grape production in the state of Colorado. Dr. Horst Caspari, CSU State Viticulturist and Professor, has partnered with Russ Schumacher and Pete Goble of The Colorado Climate Center to identify areas new areas throughout the state that are viable for introduction, or expansion, of viticulture. This study began by exploring temperature patterns in Montezuma and Fremont Counties and recently expanded to assess the entire state. Data are collected from long-term Cooperative Observer Network (COOP) weather stations and the number of years in which one would expect a killing freeze is estimated using the Parameter-elevation Regressions on Independent Slopes (PRISM) Model. A weather event is considered a killing freeze if it meets the conditions below (two different scenarios based on grapevine species):

Low numbers of killing freeze years were observed in areas known for viticulture, such as Palisade and Grand Junction. The Gunnison and Dolores River Valleys and the Four Corners Region were also estimated as having low killing freeze years per decade. These areas would be suitable for European varieties (Figure 1). Southeastern Colorado could potentially be suitable for grape growing, but cold hardy hybrid varieties will have a better survival rate than European varieties due to cold weather conditions (Figure 2). 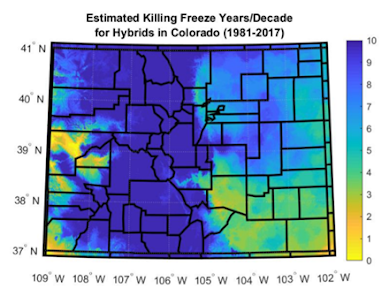 In addition to temperature, soil texture and access to irrigation water are also important considerations for aspiring viticulturists. The temperature data was overlaid with these two additional parameters to produce a map of potential viticulture exploration areas in Colorado (Figure 3). 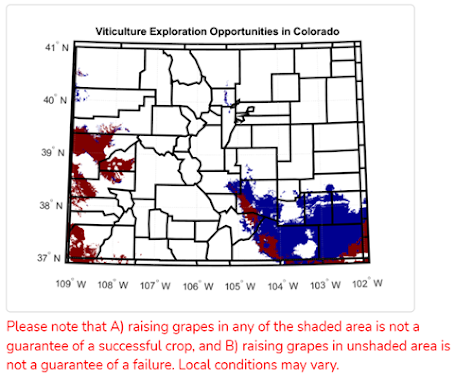 For more information on this study, please visit the Colorado Climate Center. If you are interested in growing grapes, please feel free to reach out to myself, Miranda Purcell, CSU Viticulture Extension Specialist at miranda.purcell@colostate.edu. There are also a number of resources available at viticulture.colostate.edu, Dr. Horst Caspari’s website and in the Colorado Grape Growers Guide.