Growing Opportunities and Feeding the Community

Last week, a group of Extension agents and specialists met in Durango, located in La Plata County, for a horticulture meeting followed by tours of horticultural sites in the area. One of those tours took place at the Manna Soup Kitchen, a charitable organization that has a unique approach to provide nourishing meals and support services by teaching gardening, culinary and other useful skills to those who need a helping hand. Although it is difficult to put into words the impact that this organization has had on the community, it was such an inspiring example of community gardening that I thought I would share the experience with you.

The organization started in the mid 1990’s and has since grown to include a soup kitchen, culinary training center and a large garden and orchard onsite. They use these facilities to provide chores and a sense of responsibility and community to those who use their services.

During our visit, we toured the large dining facility where people can get a nutritious meal and gather together to work on projects such as making rugs by reusing grocery bags. We then toured the food storage facilities and the culinary training center before heading outside.
On to the garden…
The Manna Garden started in 2005 adjacent to the original soup kitchen and expanded into a much large area on the property in 2010. After only a few years, the Culinary Arts Building and a free produce market, the Manna Market, were established to create a complete ‘farm to table’ system. With this arrangement, the Manna Market has helped serve over 1,000 people more than 6,000 pounds of produce last year through the garden and donations! The garden produced over 1,300 pounds of produce in 2016, a 450 pound increase from the year before. This was accomplished by over 350 volunteers and almost 1,000 volunteer hours contributed. The garden also hosted youth volunteers from across the county, who donated over 500 volunteer and educational hours to the garden.
Our tour started just inside the entrance to the garden where chard, red Russian kale, starbor kale, tiny bok choy, kohlrabi, dill, broccoli, peas, lettuce, green beans, and herbs are grown in a whimsical labyrinth garden.
After passing by the orchard area containing wide array of fruit trees and shrubs (apples, pears, cherries, plums, serviceberries, raspberries, marionberries, peaches and apricots), we made our way over to three beehives established last year to help pollinate the large number of crops growing in the garden. 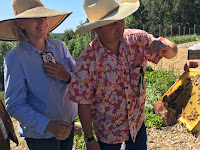 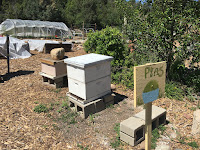 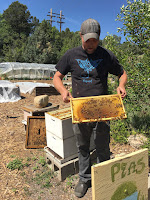 Our tour guide, Jason Cloudt (garden manager and volunteer coordinator) demonstrated how the bees make honey and brood. Jason also let us have a taste of the bees' hard work!


The hives were recently split so the bees are still working on building up their numbers (brood) and honey supply to help sustain the hive before providing honey for the soup kitchen. However, we were given a ‘sneak peak’ taste test of the bees’ hard work.

We than passed by an area with several raised beds of root vegetables and small leafy greens and large in-ground bed containing seven different varieties of hardneck garlic on our way to their compost area and worm farm.


The gardeners harvest worm castings by encouraging the worms to move back and forth across the compost bed by feeding them in different locations, collecting the castings without killing the worms.

Thanks to a donated high tunnel two years ago, the Manna Garden has a nice area to start new plants and transition them into the full sun of the garden. Once all of the seedlings are out of the high tunnel, it is used to grow a wide variety of peppers, tomatoes, and herbs.

Throughout the garden, there are perennials planted to help support the bees, trellised areas of crops like grapes and peas, and multiple garden beds tucked into every corner of the space. There is such a demand for more garden space, they have recently expanded to install several plots terraced into the hillside to provide spaces for Manna clients to become empowered by producing their own food for the 2018 gardening season.

The Manna Garden is an inspirational place that serves over 60,000 meals per year! And, their mission of "Growing Opportunities. Feeding Community." is reflective of the impact they are making by contributing to the overall health and economic vitality of the region.

The Manna Soup Kitchen and Manna Garden are located at 1100 Avenida Del Sol, Durango, CO  81301 in La Plata County and can be found on the internet at MannaSoupKitchen.org.