Snow Mold in Lawns: Should we be Worried? 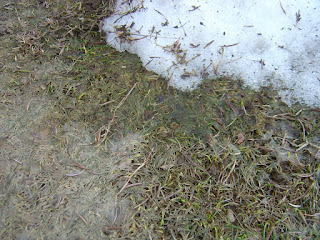 
Gray snow mold is most likely to occur on lawns when the turf has been covered by snow CONTINUOUSLY for 40-60 days. While prolonged snow cover is common on mountain home lawns, it is less common along the Front Range and in other lower elevation regions of Colorado. The Typhula fungus that causes snow mold in lawns is psychrophilic (meaning it grows most happily at temperatures around 32 F). And, like many molds, it enjoys dark, moist (but not frozen) conditions.

While we have some snow on the ground now, it is not a deep snow. And it has been extremely cold, in case you haven’t noticed. The temperatures under the current snow cover are much lower than the optimum for snow mold to flourish – so I wouldn’t be concerned about snow mold in lawns now.

Even if we get additional snow on top of what is existing, the ground has sufficiently cooled (OK, frozen) to the point that snow mold shouldn’t be a problem in lawns. Snow mold is most severe in years where we receive frequent snows (or long-lasting snow cover) beginning in the fall BEFORE the ground freezes. Deep, long-lasting snow cover on top of unfrozen turf creates perfect conditions for snow mold on turf. Fortunately this combination of conditions is rare along the Front Range (but more common in the mountains).

However, where snow is piled near sidewalks or driveways, or where it persists in shady landscapes or on the north side of homes or fences, snow mold can occur in those parts of the landscape. In the absence of prolonged snow cover, it can also occur on lawns where a layer of wet, matted tree leaves are left over from the fall (thus the importance of mulching or raking fall leaves on lawns). And because it is known as a facultative saprophyte (fancy words meaning it can live on dead plant material, though it prefers living), you can often find snow mold growing on dead plants and accumulated tree leaves in lawns, flowerbeds and vegetable gardens.

Even in those years when we do see a bit of snow mold in lawns, it rarely is so severe that it kills the entire grass plant – with damage limited to leaf blades at the top of the plant. The crown is able to produce new shoots as weather warms in the spring to replace those that have been killed by the snow mold fungus.
Posted by CSU Hort Agents at 9:27 PM