While today (March 20) is the first official day of spring, it has felt spring-like in Colorado for weeks now.  We have had record-breaking high temperatures in February (DIA reached 80 on Feb 10), and stunningly high temperatures through much of March.  Crazy to see sunbathers, people in shorts and tank-tops, and even one hardy soul swimming!


And the warm temperatures were widespread- it was the second-warmest February on record (2016 was the hottest). (https://climate.nasa.gov/news/2564/february-2017-was-second-warmest-february-on-record/).


We have missed our usual snows so far in March (usually the snowiest month on the Front Range), and the winds and warm temperatures have quickly sent the eastern half of the State into at least moderate drought conditions, with some portions of Larimer, Boulder, Weld, Denver, Jefferson, Adams, and Lincoln Counties in severe drought. A portion of Baca County even just entered the extreme drought category! (http://droughtmonitor.unl.edu/Home/StateDroughtMonitor.aspx?CO).

How can this be, when we had some epic snows in the high country, and, in fact, still have above-average precipitation (116% statewide, 108% in the South Platte River Basin up to 130% in the Gunnison River Basin)? (https://www.wcc.nrcs.usda.gov/ftpref/data/water/wcs/gis/maps/co_swepctnormal_update.pdf) 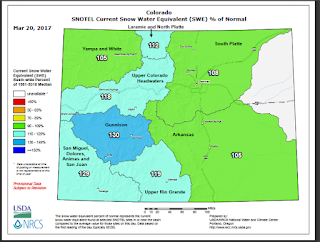 This is because drought conditions are based on the water content in the soils, and that (except for irrigated land), comes only from precipitation.  The snowpack in the high country will melt, and the spring runoff will help to fill the rivers and the reservoirs, which is great news for water managers and farmers (and probably gardeners as well, since water supply forecasts currently indicate no water supply shortages for the growing season), but it won’t do much for the forests, rangelands, and unirrigated areas.

We have already seen the effects of the droughts in these areas by the number of wildfires we have had already.  As I write, they are just lifting evacuations from the Sunshine Fire in Boulder, and there have been numerous, impactful wildfires in Colorado already this year (Sterling, South Table Mountain, Weld County, Idaho Springs, one in SE Fort Collins, just to name some. In 2017. And we haven't even reached the end of the first quarter.)


In the past, we had a fire season in Colorado. With temperatures on the rise globally, we now have fire season year round.  At least it looks like there’s a little precipitation forecast for the next week.