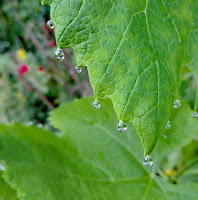 Plants don’t do meaningless, stupid things. Every process and reaction that occurs in plants has a
purpose – although the purpose or benefit might not be apparent to those of us who grow plants. A great example of a “why does the plant do that?” came up this week – the occurrence of “guttation”.

So why write about guttation in January? Well, a couple of days ago fellow blogger Alison received a cool photo from her brother Jeffrey, head grower/propagator for Bailey Nurseries in Oregon (you can read more about what Jeff does at Bailey Nurseries in this blog by Alison). The leaves on one of the many hydrangeas he is growing had an interesting pattern of white deposits on the leaf margins. What are they… where did they come from… and are these a problem?

Turns out that these spots are residue left behind after droplets of guttation fluid had evaporated from the hydrangea leaves. Guttation is water that is forced out of pores called hydathodes that are present in the leaves of some plant species. Different than stomata (structures on leaf surfaces that open and close to regulate air and water exchange), hydathodes are always open and are connected to the xylem of the plant (those tube-like structures in stems and leaves that move water and nutrients from the roots to the leaves).

Under nighttime conditions of high soil/media moisture levels, warm soil temperatures (think summer…or a warm greenhouse), high relative humidity, and cool air temperature (cooler than the soil or media in the container), roots will absorb water that travels upward in the plant to the leaves. Since stomata are mostly closed at night – which prevents water loss from the leaves – this water being forced upward into the leaves needs someplace to go. The hydathodes allow the water to exit the leaf, acting as a sort of pressure relief system. The result is that droplets of water form on the margins and tips of leaves during the early morning hours. After a few hours of sunlight, the water evaporates - sometimes leaving a whitish residue on the leaf.

The white deposits occur because guttation droplets contain some amount of mineral salts, sugars, and amino acids. The saltiness of this residue can occasionally cause a slight burn on leaf edges, but it's usually harmless to the plant. Because it's often sweet from the sugars, it may attract ants, foraging bees, and other pollinators. In the case of turfgrasses, it is considered important to remove guttation early in the morning by watering or mowing – the goal being to reduce the occurrence and severity of some diseases (fungi may use the sugars in guttation as a food source).

Guttation doesn’t occur with all plants. Because of physics (we won’t go there!), guttation occurs in shorter plants (less than about 3 feet tall). Guttation has not been observed with conifers, but is very common in grasses (like your lawn!). It is also common on some houseplants (including many succulents) – especially if you water your plants just before dark.

So is guttation a problem for plants? Aside from the minor leaf edge burn that might occur from salt deposition, guttation is generally a harmless occurrence in most cases (so Jeff’s hydrangeas should be just fine). However, there is good evidence to suggest that the organism responsible for bacterial canker on tomatoes and botrytis gray mold can be present in the guttation of infected plants – and can be easily spread to healthy plants by gardeners tending their plants early in the morning before the guttation has dried. Similarly, viruses like tobacco mosaic virus have been found in the guttation of infected plants, which can then be spread healthy plants on mornings when plants are wet from guttation and dew. This suggests the importance of adequate plant spacing and careful removal of obviously diseased plants (tomatoes, cucumbers) from among the healthy population. Finally, less observant gardeners may mistake the white guttation residue for scale insects, mealybugs, or powdery mildew – leading to unnecessary and ineffective treatments for a non-existent problem. So carefully and closely check those white spots on your jade plant for guttation residue.