It’s no secret that honey bees are having a hard time. Farmers, beekeepers and biologists sometimes refer to it as the “beepocalypse.” This worry has contributed to a huge national uptick in interest in backyard beekeeping, often in an effort to help the crisis. Other beekeepers may be in it for the sheer joy of watching and tending their colony, for the delicious honey, or as part of a self-reliant philosophy.

Honey bees have somehow become the symbol for environmental conservation – “save the bees” is a rallying cry that many are heeding.  But are we paying attention to saving the right bees? “Honeybees are not going to go extinct,” says Scott Black, executive director of the Xerces Society. “We have more honeybee hives than we’ve ever had and that’s simply because we manage honeybees. Conserving honeybees to save pollinators is like conserving chickens to save the birds.”

Native bees are much more important pollinators than honey bees, yet their populations are in trouble, too, with much less press.  Even though honey bees are much easier to manage, tote around, and bring to an area at a specified time, managed honey bee colonies only supplement the work of natural wild pollinators, not the other way around. In a study of 41 different crop systems worldwide, honeybees only increased yield in 14 percent of the crops (Garibaldi et al, Science, 2013). So, while keeping bees is helpful for honey bees, we should also be doing everything we can to support our struggling native bees (there are over 4,000 native bees in the U.S., and 946 native bee species in Colorado alone).

Make no mistake, native bees are experiencing declines equal to if not more intense than honey bees.  The rusty patched bumble bee was the first bee in the lower 48 states to be listed as an endangered species after its population shrank by an estimated 91 percent in 20 years. Many other bees are also experiencing population loss. For a list of “red list” bees (bees that are possibly extinct, critically imperiled, imperiled or vulnerable), go here: http://xerces.org/pollinator-redlist/ Reasons for bee decline include increased prevalence of pests and pathogens, poor nutrition and pesticide exposure.
There are many things you can do in your garden to help our native pollinators. Plant a diversity of native plants, and make sure you have something blooming for the whole season. This will help with the nutrition issue. It will also help honey bees, as they need all-season food as well. Native plants provide the best plants for native pollinators, due to coevolution.  Don’t buy a generic “pollinator mix” seed packets that may contain species not native Colorado. The other bonus is that native plants will be easier to grow, since they are adapted to our crazy Colorado climate. 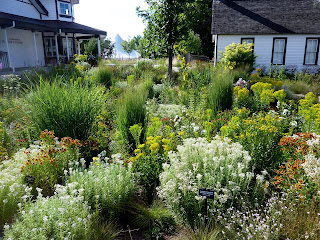 Reduce your use of insecticides to reduce bees’ exposure. If you keep bees, make sure you are vigilant about diseases. Honey bee diseases can also spread to native bee populations  There are at least two pathogens that infect honeybees that have been observed to cross over into populations of wild bumblebees.

Keep some of the ground bare to provide for nesting sites for ground-nesting bees.  This can be just a few inches to a few feet, but put it in an open, sunny, well-drained spot.  You can also provide nests for wood dwelling bees: http://www.xerces.org/wp-content/uploads/2008/10/nest_factsheet1.pdf.
Enjoy the buzzing!