Reflections on a season of indoor gardening

Posted by: John Stolzle, Jefferson County Extension
This post details what can happen when a plant enthusiast with a will to tinker moves into an apartment. In this post, I have overviewed some of the setup, challenges, current outcomes, and tips gleaned from my trials with indoor gardening.

I moved into an apartment about a year ago. It had one large south facing window which was light limited by surrounding structures. It had no patio, nor space to grow plants outdoors, nor were there open community garden patches nearby. Slowly, in the back of my mind, the urge to cultivate my apartment space grew. I eventually purchased a few houseplants, yet, I was unsatisfied. I wanted to tinker, I wanted a challenge, I wanted to pick fruit and see flowers.

One morning, I decided that I wanted a garden and that apartment life was not going to stand in my way. I had grand visions of tomatoes and peppers in winter. I wanted a challenge and a challenge is what I got.

Plants need a whole bunch of things to thrive, but for the sake of this post I am going to drastically simplify them as: Soil, Water, Light, and Space.

I began with a garden plan in my mind; however, most of my plans went out the window as soon as I first arrived at a nursery. There were just too many possibilities and so I opted to make a game out of my garden – What could I keep alive in this plant-unfriendly environment?

Due to ad hoc planning and prep, I made multiple trips to hardware stores and nurseries; it was fairly inefficient, but I eventually ended up with a selection of plants, containers, and soil. I drilled drainage holes in the bottom of 5 gallon HDPE buckets (for tomatoes and peppers) and purchased short lipped storage bins to catch water. Beneath the storage bins and lids, I placed paper towels to help monitor for moisture and facilitate sliding the containers around. I have heard reports that moisture can seep from terracotta/clay containers and damage floors, and so all of the plants were placed on plastic lids or in bins.

Note: If I were to restart the project, I would use boot/shoe trays sold at hardware stores. They would likely be less expensive, and I believe that they would be easier to position in such limited space.

After a month, many of the plants began to show significant stress. Some were spindly (in search of sunlight), the Asiatic Lilies were succumbing to disease and hadn’t grown but 2 millimeters, and the Lamb’s Ear was slowly losing its leaves. The plants had been carefully watered, planted in decent potting soil with room to grow, but needed more light.
I eventually acquired and installed a broad spectrum led grow light; the plants didn’t rebound quickly but they did show signs of increased vigor… And then I began to notice the insects.

I had attempted to avoid an insect outbreak by rinsing the foliage of each plant in my kitchen sink and then spraying some of the plants with Neem oil and/or insecticidal soap. Despite my best efforts, I have found myself locked in battle with aphids and spider mites. In this protected environment, the pesky bugs are able to feed and reproduce without a check or pressure from predators. At one point, I considered releasing predatory insects but then had visions of Cane Toads in Australia… I have so far opted to not venture into this territory, though I am very tempted.

Wiping down and then spraying the plants does seem to provide a brief reprieve from the infestation. I currently believe my challenge of aphid and spider mite management to be two-fold: 1, I occasionally re-infest my garden with new insects as I add different/new plants (to replace those which didn’t make it), and 2, my soap and horticultural oil treatments need to be better timed.

Additionally, I have learned that many potting soil mixes come pre-packaged with fungus gnats eggs. Upon adding water, these eggs hatch, and adults will soon be flying all around indoor environments.  These insects are very minor plant pests, but can be an incredible nuisance. I have had huge success managing the insects with yellow sticky paper; noted in this factsheet on Fungus Gnats: ://extension.colostate.edu/docs/pubs/insect/05584.pdf. 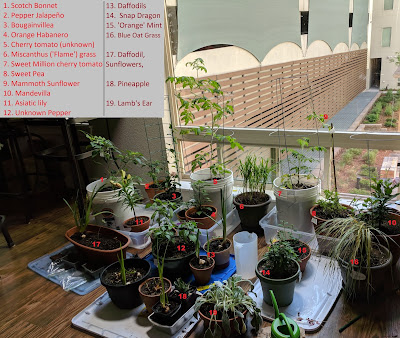 To any adventuresome gardeners considering an indoor garden, I had the greatest struggle with: Asiatic Lilies, Snap Dragons, Sunflowers, Sweet/sugar Peas, Daffodil bulbs, and ornamental grasses. The grasses struggled and failed in the most spectacular fashion.

The tomatoes and peppers seem to struggle up to a certain point of development, after which they grow quite rapidly. The Scotch Bonnet (nursery started) has done amazingly well. It did have a significant set back due to an insect outbreak and me burning it with oils, but three weeks later, it is now flowering again. I have also been surprised by how well the Bougainvillea, Mandevilla, and Pineapple have done.

What does success look like in a mad-gardener’s laboratory?  I have lost many plants along the way and have added some fun new players such as Purple Passion Gynura aurantiaca, Lavender, and Taro. It has been a worthwhile experiment in my mind. Yields have been low, but my vegetables are just starting to produce... And who knows, maybe I’ll have fresh tomatoes in winter.

I have many tales to tell from my trials with indoor gardening: of tomato training, of the importance of wind and humidity, supplemental lighting, container rotation, fertilizing, and manual pollination...  Perhaps this will be the first in a series of indoor gardening blog posts.

For more information on houseplants, check out this blog posted last Monday: https://csuhort.blogspot.com/2019/09/plant-parenthood-rise-again-of.html

Best of Luck in all your gardening endeavors!
- John
Posted by CSU Hort Agents at 11:52 AM