This year, I have an outbreak of chrysanthemum lace bugs on many different species of plants within the sunflower family in my garden, including annual sunflowers, tansy aster, rabbitbrush, goldenrods and Maximilian sunflowers. Interestingly, they don’t seem to be attacking the showy goldeneye or the threadleaf ragwort.

There are many species of lacebugs out there, and they range from 1/8 inch to 1/3 inch long. The nymph stages are wingless and are darker than the adults.  Adults are light colored, and actually quite interesting looking if you look close up – the “lace” in their name becomes obvious.   It takes about 30 days to go from egg to adult, and there can be multiple generations per year.

Lace bugs feed primarily on leaf undersides. They have piercing-sucking mouthparts that puncture individual leaf cells, and this is what causes the bleaching. The damage associated with lace bugs is similar to that caused by spider mites and leafhoppers, but a tell-tale difference is that lace bugs leave black, tar-spot-like droppings on the leaves. 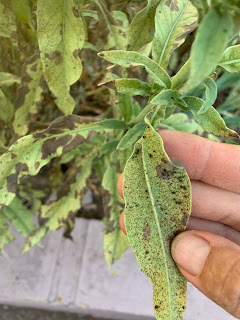 Usually, I don’t worry too much when I see aphids or lacebugs, because they typically don’t affect plant health and there are often natural enemies that can help control them – such as assassin bugs, lady beetles, green lacewings birds, and other predators.

However, in the last couple of weeks, the lace bug situation suddenly reached critical mass and I started noticing dramatically discolored leaves – the leaves turned straw colored within a couple of days or have large brown blotches.  Some smaller sunflowers were outright killed due to the infestations.  How quickly it went from being a minor nuisance to a pretty serious problem!

So, I have begun spraying the leaves with water to knock off the nymph stage, and picking off leaves with egg masses in an effort to reduce the population.  I take some comfort in knowing that population levels and damage varies widely from year to year, but will also monitor the situation more closely next spring and knock back any incipient populations just to avoid a repeat.  If need be, I’ll use some insecticidal soap or a horticultural oil, and spray it on the underside of the leaves. While broad-spectrum pesticides can be effective, I will avoid them, as they will also kill natural enemies