Who dunnit? Voles or Pocket Gophers?

There are many burrowing animals in Colorado that can cause damage to lawns, gardens, and pastures. The first step to resolving the problem is to figure out which animal (or animals) caused the damage.

The main four types of burrowing animals are voles (8 species), pocket gophers (4 species), prairie dogs, and Wyoming ground squirrel.   Moles are rarely found in Colorado, and only in the very eastern plains.  If you are outside that area, the species causing damage is one of the other four.
In this post, I'll just be discussing the difference between voles and pocket gophers, since these are the critters I most often deal with in the mountains. 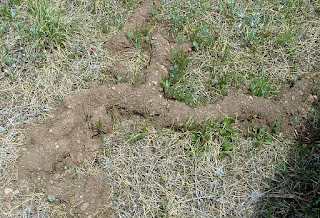 Voles
This year has been a very bad year for voles.
Voles cause several types of damage.  They gnaw on bark of trees and shrubs, sometimes girdling it entirely and causing the death of trees. Most damage occurs in the winter when voles move through their grass runways under the protection of snow. The greatest damage seems to coincide with years of heavy snowfall.
Vole damage to trees and shrubs is characterized by girdling and patches of irregular patterns of gnaw marks about 1/16 to 1/8-inch wide. Gnawed stems may have a pointed tip.
Other signs of damage by voles include: 1- to 2-inch-wide runways through matted grass with open 1-2 inch holes and spongy soil from burrowing activity.
It is common to see voles, as they are active all year round, and are frequently above ground.


Pocket gophers
Pocket gophers rarely appear above ground, spending most of their lives in burrows.  Prairie dogs and Wyoming ground squirrels, on the other hand, are frequently seen above ground.
The mounds that pocket gophers create are fan-shaped to round and usually have closed entrances, unlike prairie dogs and Wyoming ground squirrels.
The main signs of damage from pocket gophers include mounds of soil (with no apparent hole), eskers (solid tubes of soil) above ground when the snow melts in the spring, and suddenly wilting plants (due to root damage).   If you walk across an area inhabited by pocket gophers, your foot will frequently break through into their tunnels.  The tunnels are usually 2.5-3.5” in diameter, and are usually found in the top 4-18” of soil.

Now that you have a good idea of who dunnit, please refer to the following fact sheets for help with dealing with them:  6.507 Managing Voles in Colorado, 6.515 Managing Pocket Gophers.