The Simple Trials of Seed Germination


Despite the lingering winter weather, spring is on its way. And though it may yet be just a little too early for preparing flowerbeds, raised gardens and the like, now is a great time to test the germination potential of any seeds which you may have saved in seasons past.


Seeds from leftover packets or harvested from a previous year’s crops can remain viable for many years when stored under the right conditions (CSU Factsheet on storing seeds).

If you do not have any seeds from last year, you might consider saving some this season. Seed swaps and seed saving courses are becoming popular, and carrying over seeds between years can be a fun to way to maintain continuity between multiple growing seasons. For further reading on this topic, I might point you to 'this' seed saving blog post.


Generally, vegetable seed packs sold in Colorado are required to germinate above a mandated minimum percentile, although the relative longevity of these seeds can vary. Storage conditions (for example, temperature and humidity) can affect the viability of leftovers, or seeds gathered at the end of a previous season. A quick and simple test can help to assess how your seeds are doing.

I’ve been running some seed germination experiments and would like to share the process and some results.

Overall, the methods are simple: Place 10 (or more) seeds on a damp paper towel, roll/fold up the paper towel, and check it every few days. Some additional tips and tricks are presented below. 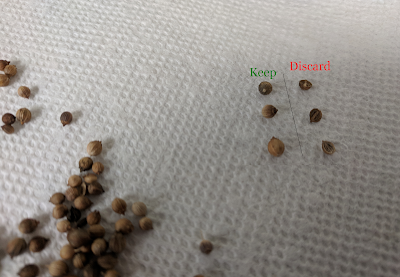 Step 2: Preparation
To help prevent contamination, clean off a countertop or other workspace as best you can, and wash your hands. A paper towel or two can act as buffer between the “germination paper towels” and a worktop.

Lay out two connected paper towels and then wet them with water (I used distilled water). Next, place your seeds in rows on the bottom portion of the two paper towels (image B.) - this will aid in later counting. For the most part, the more seeds you use, the more robust your results will be. In the photos, I was testing ‘ancient’ seed packets and therefore used many seeds, but 10 or so should suffice for a quick assessment.


Tip. 2-ply paper towels were used in these tests, they held up fairly well.

Step 3: Seed Placement & Folding
In image D., below, I made a mistake which I think is worth highlighting – I placed seeds on both the top and bottom halves of the paper towel and just starting rolling it up. Because the paper towel was not first folded (as in image C.), seeds stuck to the outer layer of the paper towel when it was unrolled - This made later counting much, much more difficult as seeds were stuck to either side of the paper towel.

After Image C., The next step is to make roughly 1.5-inch folds/rolls in the paper towel until you have something like what is seen in image E. For organizational purposes, I combined multiple germination tests (for different plants) and placed a rubber band around them (image F.). To prevent drying out, your germination test(s) should be placed in a plastic bag of some sort.


Tip: The paper towels should be damp but not dripping wet.

By day 3 some seeds in my tests had already begun to germinate; the number of germinated seeds should be counted and recorded.


Tip: It may be necessary to periodically rewet the paper towels.

But, as it goes, a few problems were encountered.... 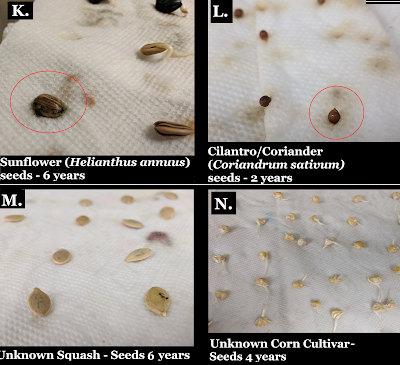 Image K.: Some seeds became fuzzy with fungi; this can largely be prevented through additional aseptic steps (discussed below).

Image L.: It can also be easy to convince oneself, as I did, that seeds are germinating when actually they are not. Coriander / cilantro seeds are tricky, in my opinion; when I stared at them long enough, I began to see that they had germinated! I snapped a photo and compared it with the same seeds a few days later, and also found some un-tested coriander seeds to compare against... no germination had actually occurred.

Image N.: Unfortunately, a major blunder occurred during my eagerness to cleanup. Days after starting the test, I realized that I had tossed out the seed packet for the corn cultivar which I was testing! I highly recommend holding on to those, as well as making good reference notes!

Tip & Note to Self: It can be very helpful to keep seed labels and few reference seeds around!

The final step is to calculate your results! After 7 – 10 days, divide the number of germinated seeds by the total number of seeds in your trial.

In my tests, the pepper seeds did not respond very well and demonstrated a 45% total germination rate. I believe that this was most likely due to issues regarding temperature.

Knowing the difference between Warm and Cool season crops, as well as the general number of days until seed germination, can be incredibly helpful – A wonderful cheat sheet can found in Table 1 (pg. 3) of the following CSU – Colorado Master GardenerGuide.

Peppers, for example, prefer a soil temperature of 80°F and are notorious for taking a long time to germinate (an expected 10-20 days). Watermelons have similar temperature requirements to peppers but are expected to germinate somewhere between 3-12 days.

Tip: A seed propagation or heating mat can greatly improve the germination rate of seeds.

Implementing additional aseptic or seed disinfesting techniques can reduce the likelihood of contaminated seeds (Image K, above); if contamination is a problem or concern, the following publication from LSU Extension & AgCenter may be of interest.

Replication:
Repeating a ‘trial’ or single germination test two additional times (with each test occurring on a different day) would add to the robustness of a test’s final results. This means re-doing the 7-10 day trial, three times independently and weighing your overall results... But everything is a balance. Some seeds should be saved for planting in the soil!