I live and garden at 8,400’ elevation in SW Colorado.  My highest summer day-time temperatures usually don’t exceed 80 degrees F, with an occasional 90-degree day.  My night-time temperatures are around 50 degrees.  My frost-free growing season is around 100 days (I don’t have any weather data to use to calculate it).

So, it stands to reason that I am most successful with cool-season crops! However, I usually grow short-season tomatoes in buckets on my deck where it is a warmer microclimate and I grow green beans and occasionally summer squash, all warm-season crops.   I rely on friends and family who live nearby at lower elevation with warmer summer temperatures for my squash and I share greens with them.

It’s been so dry the last few years; I’ve wistfully wondered what it would be like to garden somewhere with water.  This year we have had moderate monsoon moisture and that is a welcome respite from our usual drought prone garden.  The rains have made the temperatures lower as well.

I grow almost everything under season extension covers.  They provide shade, help keep pests out and reduce evaporation from the soil.

I keep my broccoli covered to try to keep the cabbage worm butterflies out.   This bed is covered with 17% row cover fabric (excludes 17% of light). 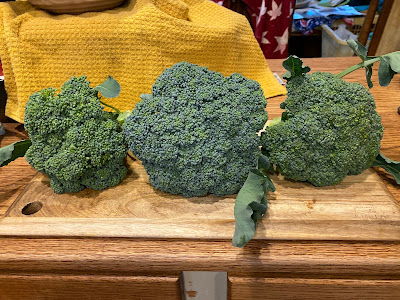 Today I harvested 3 of 4 total heads of 'Nutribud' broccoli.  I also have 4 plants of 'Belstar' broccoli, that have yet to form heads.  Not only should they both form heads, they should continue to produce side shoots until mid October or so.  There are differences of opinion about whether the side shoots are worth it, but I grew 'Nutribud' several years ago and I got more broccoli as side shoots than I did in the heads. 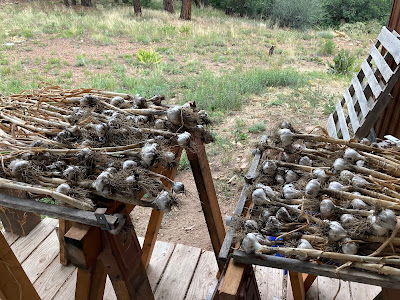 My garlic is curing. It is small but potent and I have a lot of it!  Not only am I disappointed in the size, I am disappointed that it wasn't ready till mid July.  I had hoped to harvest it on July first and follow with shelling peas. 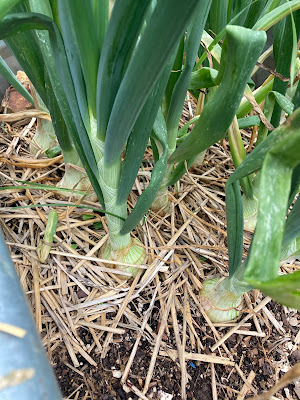 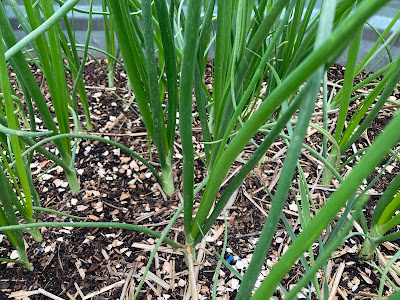 I missed the timing on my onions as well.  The first picture are onions I planted from small starter plants-- they are forming bulbs.  The second photo are onions I direct seeded into the ground.  I planted both on May 14th.  The direct seeded onions aren't very big but if they don't form bulbs, I can at least use them as 'green onions'.  They are yellow 'Candy' onions, a day-neutral, storage variety. 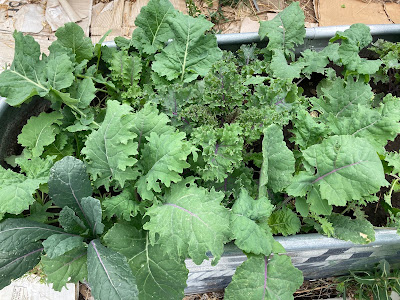 My favorite kale to grow is 'Red Russian'. I have had plants overwinter for 4 years!  This year I tried some 4 types of kale.  I direct-seeded in July so they would be ready as the temperatures are cooling down.  You may be able to pick the varieties out in the photo above:  'Western Front', a variety of Red Russian kales and 'True Siberian' kale, Brassica napus species.  There is also 'Baltic Red' curly kale that isn't very red and an unknown variety of Lacinato kale, both Brassica oleracea.  The 'True Siberian' kale had the best germination and has grown very quickly but I haven't enjoyed the texture or taste so I am slowly removing them one by one to allow room for the other varieties. 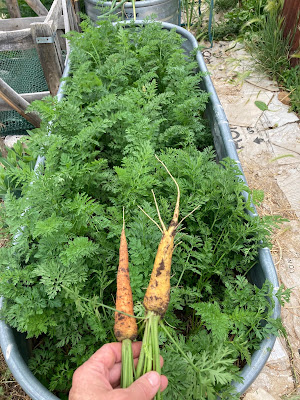 This bed is planted with a population called 'Fantasia' rainbow carrots.  I got the seeds from an Organic Seed Growers seed swap.  They wont be ready for a month or so but I pulled two carrots for this blog post, hoping to show some variety in color.  I am not sure this photo shows it well, but the one on the left is orange and the one on the right is yellow.  There should also be purple carrots and carrots with mixed colors in the roots. 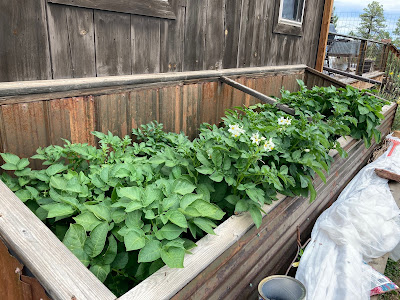 This cold frame type bed is planted with 4 varieties of potatoes developed by the CSU Research Station in the San Luis Valley.  The varieties are: 'Rio Grande' russets, 'Masquerade' yellow-fleshed, 'Purple Majesty' and a red skinned variety with white flesh that I have forgotten the name of.  They won't be ready till the tops die down sometime in October. 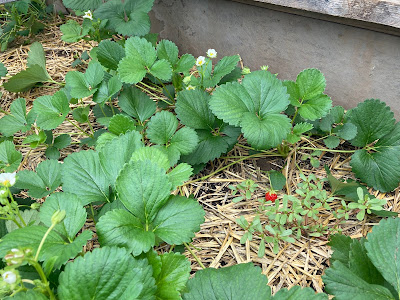 This year I planted a 4' x 12' bed with bare-root 'Mara des Bois' day-neutral strawberries.  I have grown these before in our research beds and this variety was my favorite because it was prolific and the berries were very sweet, although not very large.  They have had a slow time establishing but they are finally setting lots of blooms and should produce fruit until frost as well as next year. 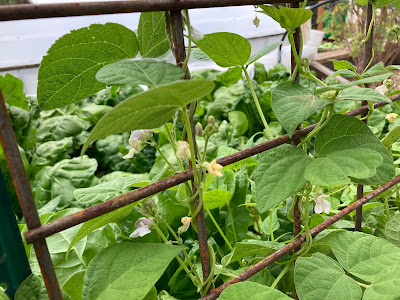 These pole beans are what I named 'Accidental Cross' because that is what they are.  I was given some seeds that were brought over from Romania and planted them.  They were a beautiful golden-colored, flat, stringless bean.  I also had 'Provider' bush beans in my garden that year.  The resulting plants from the seeds I saved from the Romanian bean was a tender, flat-podded, stringless green- colored bean.  I love them and will keep saving seeds BUT it was a sad lesson to learn. 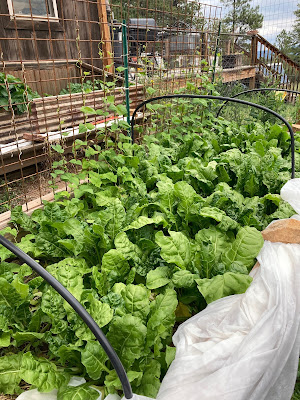 I love saving seeds and experimenting with intentional crosses.  The photo is of perpetual spinach, a green chard that has narrow stems and tastes more like spinach.  It is more tolerant of heat than true spinach.  I crossed two varieties.  The plants in the photo above are F2 plants, resulting from two years of crossing.  I will cover them and let them overwinter and next year they will set seed (the F3 generation). Even though it is a seed crop, I can still take an occasional harvest of leaves to eat. 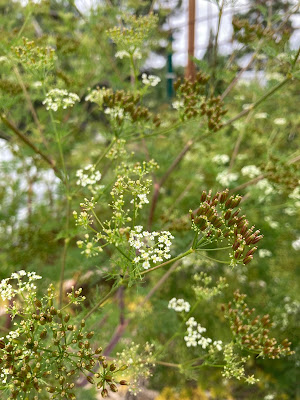 I like to try new things.  The plant in the photo is the second year of root chervil (its a biennial).  It is grown in Europe for the roots.  The seeds were difficult to find and difficult to germinate.  I ordered then online and they came in the mail, postmarked Serbia!  We harvested a few roots for Thanksgiving dinner (they taste better after 40 days of frost) and loved them!  So, I left several  to go to seed.  I have enjoyed watching the many pollinators that visit the flowers.   I will be glad to share seeds if anyone wants to try them.  They germinate best when sewn in fall, when they are fresh and lose germinability if saved.
My hope is that this blog post has disproven the myth that you can’t grow a garden in high-elevation, short-season areas with cool temperatures!

I would love to hear what is growing in your garden this year, regardless of where you live!  Have you grown any of the crops I am growing this year?