The Grub that Got Away...

With summer finally in full swing, we’ve been wading knee-deep in plant and insect samples over at the Jefferson County Plant Diagnostic Clinic. With that in mind, we thought it would be fun to clue you in to some of the pests and diseases that we’ve been seeing lately. See if you can identify any of the following samples as we walk you through some of the key steps of our identification processes…

Our first culprit is a first to our clinic. With a piercing, sucking mouthpart originating from in front of its eyes and long, segmented antennae, this insect appears to fall under the Hemiptera order. 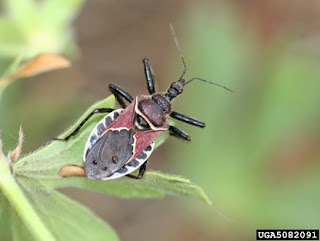 This sample came with a critical piece of information for its identification: the environment in which it was found. Specifically, this insect was found attacking a honey bee near a hive. 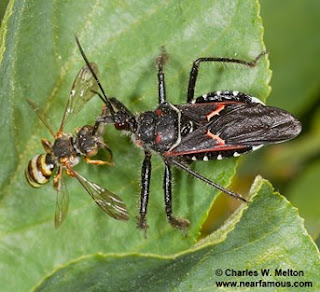 In addition to the dorsal and ventral markings on the insect and the fact that the mouthpart had three segments, these clues all indicate that this insect is…drumroll please…a bee assassin (Apiomerus spp.)! There are three species of bee assassins within Colorado and they often hide and wait for their prey before ambushing them. While we all prize our bees and dislike anything that harms them, bee assassins have not been identified as a threat to our bees and are actually generalist predators, meaning they feed on a range of insects.

Our next culprit makes its way, unfortunately, into our clinic a handful of times a year. Like the bee assassin, this sample was also identified to the Hemiptera order, which is also the order referred to as “true bugs”.  Additionally, this sample was found in an assisted living facility bedroom…any ideas yet? 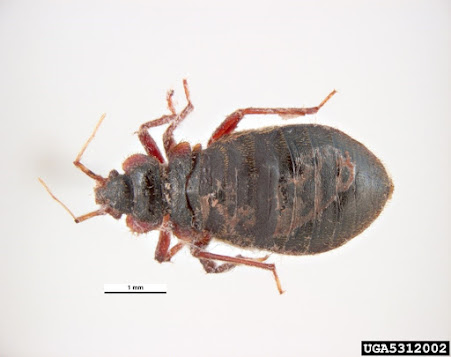 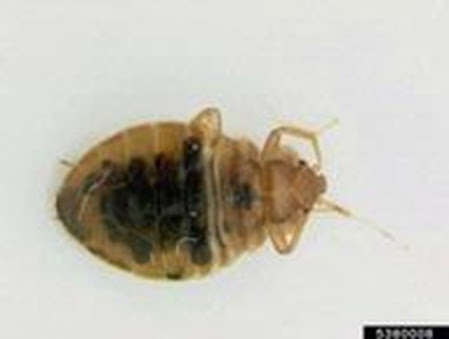 Note: the piercing, sucking mouthpart originating from in front of the eyes and the long antennae broken into 4 segments.

Based on context and morphology, our insect appears to be either a bed bug or a bat bug (both belonging to the Cimicidae family). To differentiate the two, it’s important to observe the fringe hairs on the pronotum and the wing pads, as noted in the figure below. 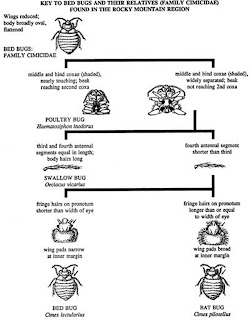 What’s the final verdict? It’s a bed bug (Cimex lectularius), ew! Bed bugs are bloodsucking insects, often feeding in the middle of the night. They do not transmit disease.  People often develop red, itchy swellings from bed bugs, but these bites alone are not enough to diagnose a bed bug problem.  Identification requires microscopic examination of the beak length, antennae and pronotal hairs.  Bed bug interceptors, basically traps that bed bugs can’t climb out of, can be placed underneath the bed post in order to monitor for bed bugs.

Next up, we have a raspberry plant that was brought in for management advice. This sample already had been diagnosed upon entering the plant clinic, but we won’t give you the answer that quickly! The key symptom in this diagnosis is that the shoot tips of the raspberries are wilting. Additionally, there are two rows of punctures along the stem, beneath the point of wilting.

Spoiler alert: these two rows of punctures are actually made by female Raspberry cane borers (Oberea perspicillata), surrounding the point at which eggs have been laid in the pith of the raspberry cane. Upon hatching, larvae burrow down through the pith, making it down about an inch or two from the punctures by the first winter, and eventually making it down to ground level. To control for the Raspberry cane borer, it’s best to prune the raspberry canes below the puncture marks, or as far down as there is evident damage to the pith of the cane. 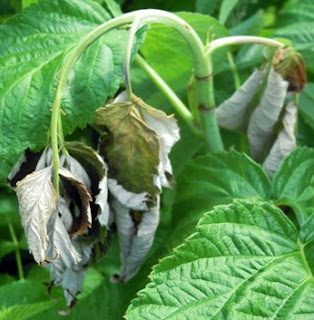 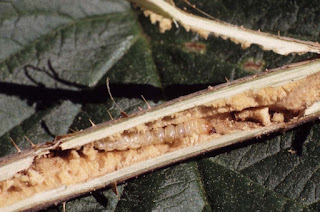 Next in our line-up is a crabapple tree with an array of symptoms that are quite telling and commonly seen in our clinic. Looking at the crabapple branch, we could see darkened, mummified fruit, as well as blackened and crooked shoot tips (which we refer to as shepherd’s crooking). 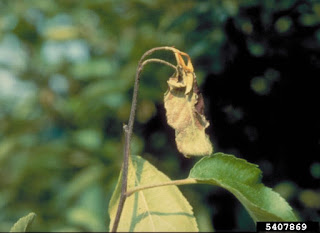 Upon further investigation in the lab, we could see under the microscope that there was bacterial streaming (i.e. the movement of bacteria out of the cut tissue) present in the fruit. Watch a youtube video of bacterial streaming HERE.  So cool!  This confirmed our suspicion that this crabapple tree has…Fire blight! Fire blight is a bacterial disease, caused by the bacteria Erwinia amylovora, that affects members of the rose family. The bacteria can be spread by insects, rain, or contaminated pruning tools, which is why rainy springs are conducive to the spread of Fire blight and why we recommend to disinfect pruning tools between every cut when working with plants of the rose family. Blossom blight (blackened, dead flower blooms) and oozing exudate from the tree or fruit are other tell-tale signs that your plant may have Fire blight. Unfortunately, there is no cure for Fire blight, so it’s best to prevent the spread of the disease and remove infected plant parts.

Last, but not least, is the grub that got away! Late one afternoon, we received a sample of a grub that was found in a mulch pile and placed it, along with some mulch, in a closed petri dish overnight. To our surprise, the grub was nowhere to be found the following morning – all that remained in the petri dish was mulch (see below). 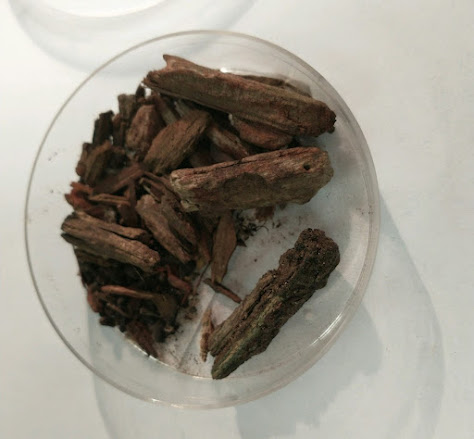 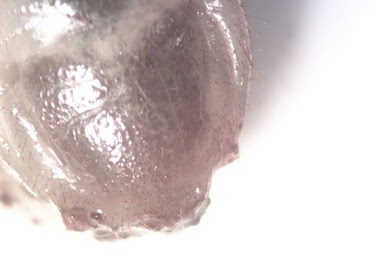 Interestingly, bumble flower beetles form oval, earthen pupal cases as they mature into their adult forms and, looking more closely at second sample, we were even able to find some (see below)! 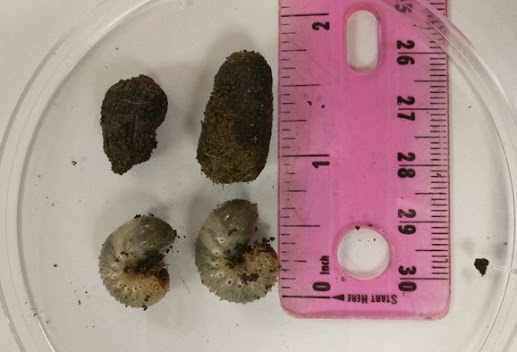 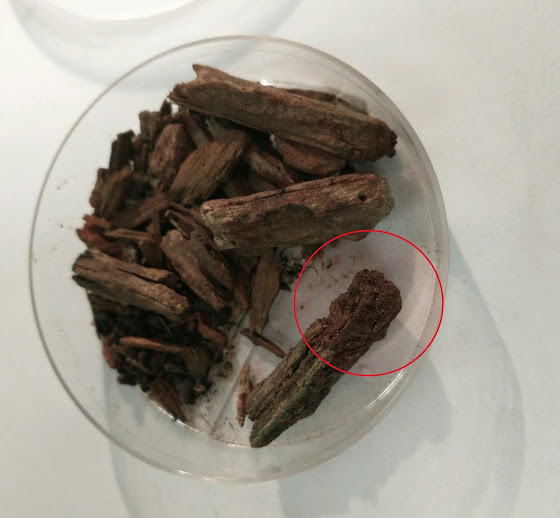 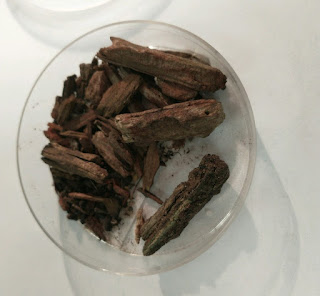