The appearance of Ascochyta Leaf Blight has become an annual springtime event on lawns in Colorado. We have written about Ascochyta before: see our 2013, 2015 and 2016 blogs on this lawn disease. For more detailed information on Ascochyta in lawns, read those blogs because I’m not going to repeat everything that we've already written about it.

What I do want to talk about is WHY the Ascochyta disease appeared so suddenly over the last week. We’ve been inundated with calls, emails and texts with a common theme: “My lawn was perfectly green, and now you should see it! What happened?”. The explanation of why – that the disease is incited by drought stress –  doesn’t make sense to people because it appeared after the very wet (2 plus inches of water) snowy/rainy storm that came on May 16-18. That abundance of moisture (here’s what people DON’T remember) was preceded by two WEEKS of above-normal temperatures and very dry weather (red flag weather, if you recall?). And while everyone who has seen this happen to their lawns claims they were watering, I saw a lot of drought-stressed turf in the week before the storm. All it takes to turn Ascochyta on is a day or two of drought stress and heat during the spring – which this graph clearly shows was probable in home lawns this May. Those who REALLY were watering their lawns (or have shady lawns, or north exposure lawns) are not seeing Ascochyta.

Here are some pics of what we’ve seen the past week. 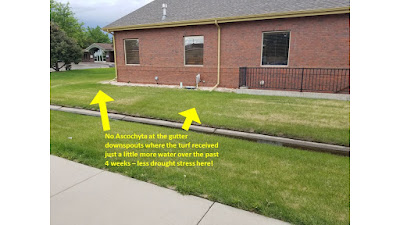 Some quick bullets on the disease (go here for more details):