Trees in the Land of Dr. Seuss

Visiting the land of Dr. Seuss recently brought back some pretty old memories. Like many kids of my generation, my sisters and I grew up with the rhyming words, lessons, and odd-looking creatures and trees of his books. In traveling to San Diego and La Jolla, CA, area you can sure see how Dr. Seuss got his inspiration.


This coral tree (Erythrina coralloides) near Seaport Village reminds me of the three tree. The coral tree is among the pea family members found in tropical and subtropical regions. It’s often used as street and park trees because of its shade. The tree branches grow to resemble coral branches. Many species also have bright red flowers, so there’s some debate about just how the common name came to be. 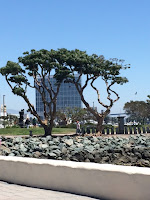 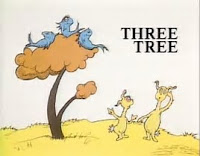 Below is one of the many varieties of Eucalyptus (Eucalyptus spp.) trees in the area. (I’m not even going to try to guess which one!) Do you think they were inspirational to the story of “Horton Hatches the Egg”? Or maybe the truffula trees of “The Lorax”? 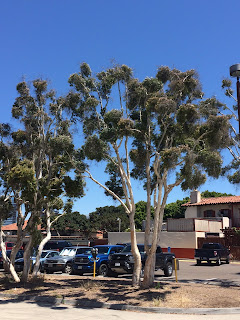 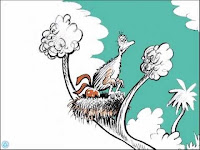 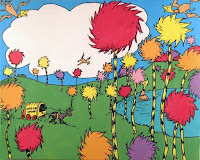 Eucalyptus trees are not native to California; they were imported when miners from Australia told stories of the large, quick -growing trees that would grow almost anywhere. Dreams and eyes grew large as entrepreneurs visualized the fortunes that could be made from growing much needed shipbuilding  lumber in a short period of time. It’s believed eucalyptus was first planted in San Francisco during the 1850’s.


Remember the expression - “if it sounds too good to be true, it probably is?”  That’s what happened in this story. The wood split and curled and was useless for lumber. Australian shipbuilders used old-growth eucalyptus that apparently didn’t have this performance issue.
Eucalyptus was growing in San Diego by the 1880’s for fuel, railroad ties and to spiff up the landscape. The railroad tie venture was a failure for the same reason that the wood failed as lumber. Some might argue that the trees don’t really beautify the landscape. Today, eucalyptus are considered an invasive pest tree that crowds out native vegetation.


Did palm trees inspire this (and many other versions) from “The Butter Battle"? I believe this is a Senegal date palm (Phoenix reclinata) which is originally from Africa. It has a suckering habit and tolerates drought and dry heat. It’s usually used as a specimen planting, particularly since the plants often lean outward a bit and so take up even more space than the clump itself.  On the down side for us in cooler climates – it’s only hardy to about 23 degrees F. But looking at the bright side, we don’t have to remove the old leaves- a good thing- since they have 8” long, sharp thorns! 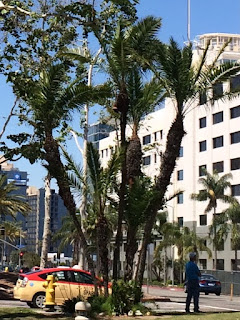 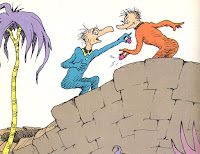 So remember next time you’re reading a Dr. Seuss story that the weird looking trees have real- life inspiration. There’s something to the old adage about truth being stranger than fiction!
Posted by CSU Hort Agents at 9:24 AM