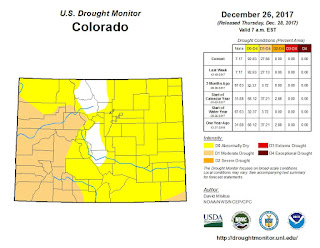 It’s been a dry fall and early winter throughout most of Colorado – in spite of the recent snow (that’s rapidly disappearing as I write this today). Little precipitation, combined with windy, sunny, and warm days, is a pretty good recipe for some winter turf injury (aka “winterkill”). Throw in some alternating extreme cold with the warm days and things get potentially worse for turf, trees, and shrubs in our landscapes. But not all “winterkill” is the same when it comes to turf. Here are some examples from the spring of 2017 (these were all in April/May) to illustrate that point. 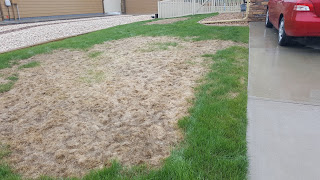 Winter injury from drought – enhanced by VERY thick thatch in this bluegrass lawn. Note that the green turf is where water was supplied by a gutter downspout, runoff from the driveway (plus the concrete acts as a “mulch” for turf growing alongside it), and runoff from the neighbor’s gravel-covered plastic.

This lawn had been sodded in early 2016 and was perfectly green and healthy going into the winter of
2016. It had been handwatered religiously throughout 2016, was mowed the correct height, and was otherwise perfectly cared for. The problem was the soil under the sod. The dead area was where home construction was “staged”: lumber, roofing, tile, other building supplies were dropped off – along with concentrated, heavy, constant traffic. The soil was not tilled sufficiently prior to sodding, so almost no rooting occurred following sodding. The constant handwatering in 2016 kept it alive and looking perfect, but the lack of rooting during the winter resulted in winter desiccation and sod death in spring 2017.

This lawn suffered from turfgrass mite feeding in the late winter and early spring. Mite feeding and reproduction is favored by dry conditions. Drought-stressed turf is often killed by mite feeding in the spring if numbers are high enough and no snowcover or spring rains occur – and if winter watering isn’t performed at least a few times during the winter.

The common thread here? Water! Turf, trees, shrubs, and other landscape plants may not be growing and thus USING much water during the winter. But when it’s dry, windy, sunny, and humidity is low, our landscape plants are LOSING water. When we don’t receive enough snow to provide periods of snow cover during the winter, and plants aren’t mulched (like turf!), are young and not fully established, or have poorly developed root systems, winter watering can be essential for preventing winter injury or death.

When weather allows (above freezing for a day or two), run a hose and sprinkler out to the drier parts of your landscape (especially south- and west-facing parts of your landscape), to new sod, trees, and shrubs, and to areas where you have experienced winter injury in the past (perhaps from turf mites). Apply enough water to moisten the crowns of the turf plants and to get some water into the root zone of new trees and shrubs. The goal isn’t deep watering, but rather to prevent desiccation of crowns and young root systems.
Posted by CSU Hort Agents at 2:38 PM